Block 8: A Question of Loyalty

What are you?”
That was the most common question asked of me when I moved to Salt Lake City 15 years ago.
Well, I am half Japanese. My natural mother, Harue Ueda, was a child in Nagasaki when the bomb fell to end World War II. I was adopted into a Caucasian family at the age of 8, so I really never thought about myself as anything but, well, white.

That was the most common question asked of me when I moved to Salt Lake City 15 years ago.

Well, I am half Japanese. My natural mother, Harue Ueda, was a child in Nagasaki when the bomb fell to end World War II. I was adopted into a Caucasian family at the age of 8, so I really never thought about myself as anything but, well, white. And I grew up in a heavily Mexican community in southeastern Arizona, so the idea that my skin might be darker than someone else’s never crossed my mind.

The question suggests something out of balance, a problem to solve. At first I didn’t really understand the question. But it kept coming and I realized I just might be different-looking from the average Salt Laker, circa 1994.

Late that year, I happened upon a shelf of books about the Japanese internment in the City Library. I discovered an internment camp named Topaz had been located in Utah during World War II. The internment was something I had known about peripherally at best. And although I knew I was of Japanese ancestry, I had never really thought about that as a part of me. Until that day in the library when I realized that, had I lived in a West Coast state during World War II, I would have been interned.

On February 19, 1942, following the December ’41 bombing of Pearl Harbor, President Franklin Delano Roosevelt signed Executive Order 9066, authorizing the creation of internment camps on U.S. soil. According to the 1940 census, there were 127,000 persons of Japanese ancestry living in the United States. The vast majority (120,000) lived in West Coast states, predominantly in California. Those 120,000 were “evacuated” from their homes. About 10,000 were able to voluntarily relocate to inland states. The remaining 110,000 were interned in 10 camps in Arizona, Arkansas, California, Colorado, Idaho, Wyoming and Utah. 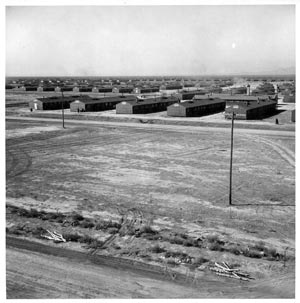 From there it gets complicated. Two-thirds of those interned were U.S. citizens—the first generation born in the U.S. (Nisei). Their parents (Issei) had immigrated to the U.S. but were barred from becoming citizens due to a 1922 Supreme Court ruling upholding the 1884 Exclusion Act, which excluded persons of Asian ancestry from becoming citizens.

In 1940, Japan had signed the Tripartite Pact, creating an alliance with Germany and Italy. That prompted President Roosevelt to engage Curtis Munson to conduct a study to determine the sympathies and loyalties of Japanese Americans living in California in 1941. The Munson Report found that “Japanese Americans possess an extraordinary degree of loyalty to the U.S.” and that “immigrant Japanese are of no danger to the U.S.” The findings were quietly disregarded. By the fall of 1942, 10 internment camps were in operation on U.S. soil.

Topaz opened on September 11, 1942. Located 16 miles west of Delta, the camp was populated with over 8,000 Japanese Americans from the San Francisco Bay Area, who arrived with only what they could carry.

In January of 1943, President Roosevelt announced that volunteers from the internment camps would be accepted into the 442nd Regimental Combat Team, an all-Nisei combat unit. Residents 17 years of age and older in all the camps were given a questionnaire. Two questions troubled internees: Question 27 asked, “Are you willing to serve in the armed forces of the United States on combat duty wherever ordered?” Question 28 asked, “Will you swear unqualified allegiance to the United States of America and faithfully defend the United States from any or all attack by foreign or domestic forces, and forswear any form of allegiance or obedience to the Japanese emperor, to any other foreign government, power or organization?”

Nonetheless, the 442nd became the most decorated unit in U.S. military history for its size and length of service, receiving more than 18,000 individual citations for bravery and nearly 9,500 Purple Hearts.

Topaz closed on October 31, 1945. Each internee was given $25 and a train ticket to their former homes, where the majority returned to find they had lost everything. It took until 1988—53 years from the end of World War II—for the U.S. government to issue a formal apology.

The question of loyalty lies at the heart of Plan-B Theatre Company’s world premiere production of BLOCK 8.

Since that day in the library in 1994, I’ve wanted to find a way to create a play about the Japanese internment experience. When I discovered playwright Matthew Ivan Bennett’s mutual interest in Topaz a little over a year ago, the creation of BLOCK 8 was inevitable. 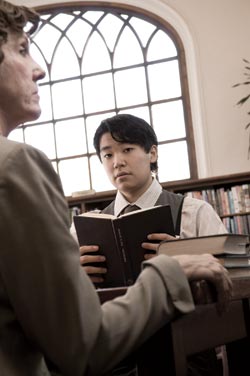 BLOCK 8 is a simple, two-person drama about an unlikely friendship. Ken (played by Bryan Kido) is a young Nisei internee at Topaz grappling with whether to enlist in the military to prove his loyalty to the United States. Ada (played by Anita Booher) is a Caucasian librarian at Topaz whose son is fighting in the Pacific. The tentative relationship between Ken and Ada offers insight into the paranoia, distrust and xenophobia that led to the existence of Japanese internment camps.

With Barack Obama in the White House, his pledge to dismantle Guan?tanomo Bay and his pick of Japanese General Eric Shinseki to lead Veteran Affairs, the future seems brighter for race relations in the United States. But in a post-9/11 world, could it happen again?