Bike Ride of the Month: The Great North and Back via Legacy Parkway Bike Path

For as long as weather permits, CATALYST editor Pax Rasmussen will take us along on a Salt Lake-area bike ride, with details on how you can do the same.
by Pax Rasmussen 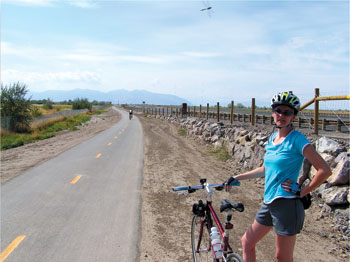 In case you haven’t noticed already: CATALYST likes bikes. Last month, we ran Steve Chambers’ "The Well Tempered Bicycle Commuter," an article to help you overcome your objections to bicycle commuting. This issue, as well, has a bicycle commuting article, and you can expect more in the future.

Look to Steve’s articles for the nitty gritty of getting around on your bike-and look here in the Green Beat for where to ride. Starting now, each month I’ll detail a fun and energetic recreational bike ride, easily accessible from the downtown area or nearby.

This month: The Great North and Back, via the Legacy Parkway Bike Path.

On September 13, UDOT opened the Legacy Parkway for traffic. The Parkway is a 14 mile stretch of what was originally proposed to be the Legacy Highway, which was planned to run from Brigham City in the north to Lehi in the south, well over 100 miles altogether. Anyone who has lived in Salt Lake City during the last decade doubtless remembers the political controversy over this project. A hot topic then and now, the Legacy Highway would have run through many miles of international bird migration areas and wetlands. Also, a number of citizen advocacy groups doubted the wisdom of building more roads to alleviate traffic problems. In part to settle this issue out of court and to get the most critical portion of the highway built in a timely manner, Governor Huntsman, UDOT, the Sierra Club and Utahns for Better Transportation reached an agreement in 2005 that effectively brought about the Legacy Parkway as it is today.

Whether you supported the highway in the beginning or not, the Parkway is here, and at least they built a nice place to ride your bike while they were at it. The entire stretch of road winds through Davis County, more or less parallel to Interstate 15, well to the west in the "wetland" area. As part of the agreement, 2,225 acres of land along the west side of the Parkway has been set aside as a nature preserve (closed to the public except for volunteer events: contact Eric McCully at emccully@utah.gov for info on getting involved). Much of this preserve along the road is awaiting "mitigation," including the restoration of oxbows, elimination of unnecessary roads, ditches, fences and canals, reshaping of natural land contours, restoration of native plantlife and the removal of a whole lot of trash and waste. So far, the scenery isn’t much, but it’s obviously in the works, and it’s a lot better than riding Highway 89.

The Parkway itself is made of "quiet" pavement, and has a 55 mph speed limit. This actually works: When riding along the bike path that accompanies the road (usually about 50-100 yards apart), traffic noise is a minimum. The bike path itself is very well made-smooth, flat pavement with a clearly marked center dividing line. Every so often the path passes a park/trailhead (the possibility of bathrooms and/or water fountains at these parks is under discussion), and frequently winds through wetlands with pretty wooden bridges over the streams.

The southernmost access point for the Legacy Parkway trail is in North Salt Lake on Center Street, and it goes north all the way to the Farmington Frontrunner Station.

Instead of just riding your bike up the Parkway and back, consider what I call my Great North and Back route: Starting from downtown, take 200 West north until it curves, becoming Wall Street. This dumps you onto 300 West, which becomes Beck Street. Follow Beck past the refineries (which is scenic in a post-apocalyptic sort of way). Keep an eye out for the bike route signs: somewhere near the gravel pit there’s a bike/ped path that keeps you away from the Highway 89 traffic. Take this till it ends, then hang a right at Eagle Ridge Dr, through the roundabout and onto Orchard (on your left). This will take you through the neighborhoods of North Salt Lake, Woods Cross, etc, up into Centerville. It’s quiet and pretty, with good views of the valley and the lake. Near 1000 North in Centerville, Orchard ends at Chase Lane. Take a left on Chase, go down the hill and make a right on Main. A couple miles up Main Street there is a gravel path that heads downhill on the left (keep an eye out on the right for Lucky Star Way, which is opposite this path-if you hit Glovers Lane, you’ve gone too far). Take this pleasant, wooded path west to the I-15 frontage road, then turn north for a few hundred feet to the bridge that crosses I-15. Once across the freeway, you can immediately get onto the Legacy Parkway bike path. The path will take you all the way back to North Salt Lake. Use Center Street to easily come back east and hook up again with Highway 89 and the path past the gravel pit. This ride is quite scenic with lots of little ups and downs. A good afternoon workout, about 38 miles round trip.

Check out the link to a detailed map of the northbound part of this ride. Unfortunately, Google Maps has yet to incorporate the Legacy Parkway:

This article was originally published on September 30, 2008.