For as long as weather permits, CATALYST editor Pax Rasmussen will take us along on a Salt Lake-area bike ride. 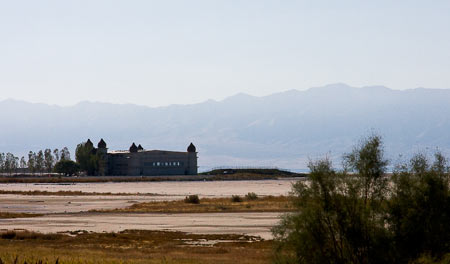 Take a trip out to the shores of the Great Salt Lake now, and it’s hard to understand the beach appeal Saltair held a century ago. The coastline of the lake is a good half-mile or more from the pavilion, and salt flats stretch to the horizon in two directions.
Although not the bathing phenomenon of the Mormons during the early 1900s, Saltair is now one of the more popular music and festival venues near Salt Lake City. Dave Matthews Band, The Cult and The Black Crows have played at the pavilion, and a number of rave-type parties take place there each year. In 1962, scenes for the cult horror film Carnival of Souls were shot at the second Saltair building. Numerous photographers have used the stylistic onion domed building to add an outlandish setting to their photos—they appeared in the background for a Beach Boys album in 1967.
The current Saltair, like the two that preceded it, has a history of disaster and a general sense of things not going according to plan. It was built in 1981 from a salvaged Air Force aircraft hangar and, global warming be damned, flooded a year later. For nearly a decade, the pavilion was unusable, inundated by four feet of murky saltwater—the Great Salt Lake enjoying its highest water level in history. It’s sort of ironic that this Saltair’s troubles have all been water (or the lack thereof) related, as the two that preceded it burned to the ground.
The ride to Saltair is flat, fast and fun. If you don’t mind a little city traffic, start from downtown and take North Temple all the way to the airport. It looks like the road ends ahead, but just keep going until you reach the security gate. In the summer, the path through the airport is closed from 10 p.m. to 5 a.m., and from 7pm to 7 a.m. now to March 31st, so plan accordingly. There’s routes around the airport, but they’re not nearly as pleasant.
Once through the gate, the ride follows a bike path through the airport complex. This part of the ride is fun and pretty: no traffic, as only bikes and walkers are allowed on the path, and huge stands of mustard yellow yarrow blossoms fill the air with a sweet, medicinal scent during the autumn months.
After the airport path, just follow the bike route signs. You’ll stay on Wiley Post Way for quite a ways, making a right on Admiral Byrd road. After about a block, turn left on Amelia Earhart Drive, and stay on it until you reach the I-80 frontage road. Although the road you ride on is typically deserted, I-80 traffic can be loud and obnoxious on weekdays: The best time for this ride is Sunday afternoons. 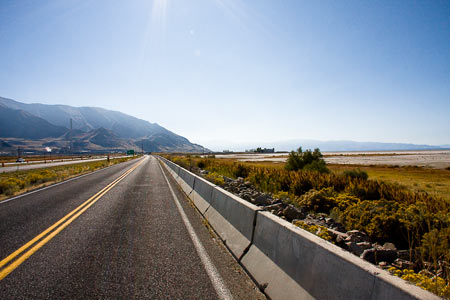 Make sure to bring a spare inner tube for this trip, since much of the ride is far from telephones or bus stops and goat-head thorns can be present on the road.
The frontage road will take you all the way to Saltair (where you can refill your water and get a candy bar during the warmer months). If you choose, the ride can be extended to the Great Salt Lake State Park and Marina, or even to Tooele. Round trip from downtown to Saltair is approximately 38 miles.
An interactive map for this ride can be found here:
http://www.mapmyride.com/ride/united-states/ut/salt-lake-city/468152871874
Pax Rasmussen is a full-time CATALYST staffer, Agent for Change and a lieutenant in the H.E.A.D. Revolution. When he’s not out agitatin’, you can usually find him bumming around a local coffee shop, most likely Nostalgia. Fnord. http://www.paxrasmussen.com.

This article was originally published on November 3, 2008.