Go crazy with the Antelope Island Moonlight Ride, July 10th.
by Shane Farver
The moon has a knack for making people go a little nutty. This month, for instance, it will cause an estimated 1,500 people to converge on an island inhabited by bison, bighorn sheep and antelope—and ride their bikes 22 miles in the dark.

The 16th Annual Moonlight Bike Ride is certainly an out-of-the-ordinary experience. Riders atop all manner of bicycles, from recumbent bikes to tandems, skinny tires to fat, will ride from the north marina to Fielding Garr Ranch and back. Along the way, riders will glide past shadowy peaks while watching the city lights sparkle on the mainland. “It’s a world apart, and yet you’re so close to the city,” says Neka Roundy, mayor of Kaysville and event planner for Davis County Community and Economic Development.

The moonlight ride is a quick escape from the city, and riders sometimes encounter wildlife, such as owls and bison. In fact, several years ago one cyclist had an uncom­fortably close encounter with a bison, according to Roundy—he ran into it. 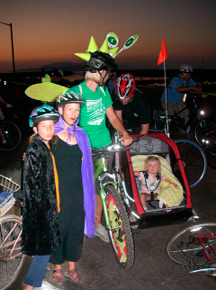 In addition to partaking of the scenery and wildlife (preferably at a distance), many riders will dress up in costumes related to this year’s theme: “Moonlight Madness.” Think mad scientists and Franken­stein’s monster. Or maybe “A Midsum­mer Night’s Dream”? Cyclists can participate in costume and bike decoration contests 15 minutes before the start of the ride. Winners will receive gift certificates and other prizes. Proceeds go to Friends of Antelope Island.

Although the nearly full moon (the official full moon is on July 7) should provide some light, state law requires that you have a working headlight as well as reflectors. Biker’s Edge, an area bikeshop, will provide headlight and taillight combos at the event for $20. You will also need a helmet to participate. The Davis County Health Depart­ment will be selling them for $7 before the ride.

In addition to its brown peaks and abundant wildlife, Antelope Island is also known for its occasional onslaught of insects. Although insect levels on the island can fluctuate from nearly none to dense clouds of gnats, a bottle of repellent is a good idea.

The ride is not competitive, so riders of all ability levels are welcome. The ride starts on a steady climb, then dips down a long hill where you can let the wind whip your face. However, children, who don’t necessarily go in a straight line, might be in your path, so don’t let loose too much.

The remainder of the first half of the ride is a generally flat approach to Fielding Garr Ranch, where you can refuel and see if you’ve won any raffle prizes. Water is provided at the ranch, but you’ll want to stock up on your own.

On the return trip, that long hill that’s so fun to float down in the beginning is now a grunt of a climb on a road bike and downright grueling on a mountain bike. Your reward for burning some major calories is a dreamy descent back down to the marina.

The entire ride takes one and a half to three hours, depending upon ability. To stretch the ride longer, you can tack on an extra seven miles both ways by riding the causeway to the island and back.

You can ride UTA’s Front Runner to the Clearfield station, then pedal to the causeway (bear in mind that FrontRunner won’t be running for the return trip). Visit: www.mapmyride.com/ride/united-states/ut/clearfield/786124554110334236. But you;ll have to catch a ride back to the city, as Front Runner doesn’t run that late. If you’re up for a gargantuan ride, you can take the Legacy Parkway Bike Path, see the October 2008 issue of Catalyst,  from North Salt Lake to Farmington and then work your way north and west to the island.
16th Annual Moonlight
Bike Ride: July 10, 10pm
Antelope Island State Park, Syracuse
Download registration form at www.daviscountyutah.gov or register on-site starting at 7:30p the night of the race. Cost: $25 ($20 for children 14 and under). Fee includes T-shirt, park entrance fees and refreshments at Fielding Garr Ranch. Participants will also be entered into a raffle for a Jamis mountain bike from local bike shop Bikers Edge.

When he’s not teaching or working on getting his master’s thesis published, you can find Shane riding his bikes and getting dirty in the Utah desert.

This article was originally published on June 29, 2009.