Emigration Canyon is a Salt Lake favorite for beating the heat.
by Paige Beals

This month’s ride is a popular among local cyclists: Emigration Canyon. On almost any given day when the pavement is dry you can find a hearty soul pumping the 8.5-mile trek up the canyon on their trusty bicycle. It is an easily reached route out of the hustle and bustle of Salt Lake City and into the brilliance of the Wasatch mountain range.

The canyon is a moderately populated township in Salt Lake County on the east side of the Salt Lake valley, beginning at the southern end of the University of Utah, just north of Hogle Zoo.

Emigration Canyon has a long history. The ill-fated Donner Party was one of the first groups to traverse the rugged canyon in 1846, slowed by the necessity of cutting through the dense scrub oak. This task set them back three weeks and ultimately contributed to their doom in the Sierra Nevada Mountains. It is also where the Mormon pioneers first entered the Salt Lake Valley a year later and Brigham Young famously declared, “This is the place.” 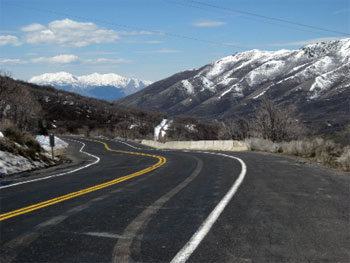 Nowadays, the canyon’s paved road is one of the most popular bicycle rides along the Wasatch Front. It is easily reached from just about any place in the valley and has little to moderate traffic during the week, although during the summer months traffic can increase-including motorcycles and trucks towing boat trailers.

Emigration Canyon has a bad rap with cyclists-many believe the ride to be trafficky and dangerous. Although that’s not nearly as true as rumor has it, in recent years developers have been building more new homes; as the number of new homes increases in the canyon, so does the road traffic.

Especially because of resident traffic and the increased popularity of cycling, there are a few rules of the road to keep in mind when riding in the canyon, including the countywide rule of riding no more than two riders abreast. This law applies unless otherwise regulated by a “Single File Riding Only” sign or if it impedes the normal and reasonable movement of traffic. A bicycle lane in the lower part of the canyon enables riders to ride side-by-side, but disappears just a ways after Ruth’s Café-then it’s single-file riding only. If you’re driving, note that county law says you must give cyclists a minimum of three feet of room when passing. Although the bike lane disappears, there’s a wide shoulder until the Pinecrest turnoff near the top of the canyon. After that, the shoulder narrows. Also, early morning and late evening riders should realize that drivers have reduced visibility, as they are driving into the sun.

“Cyclists are most safe when they are aware of their surroundings,” says Sgt. Cory Latham of the Salt Lake County Sheriffs Office. “There are pedestrians, animals, construction and garbage collection going on up there. And the traffic in Emigration Canyon is projected to grow.” Keep an eye open and everything will be just fine.

According to Sgt. Latham, things run smoothly if motorists and cyclists obey the rules-traffic engineers have studied Emigration and hopefully have perfected the system.

Because of the moderate grades it is ideally suited to both the novice rider as well as the elite training for the next big race. Refreshments can be found along the way, too; riders can stop at the Sun and Moon Café or the recently reopened Ruth’s Diner.

Paige Beals is the volunteer director for Utah Free Media (utahfm.org), and the host of “Wasatch Cocktail,” 12-3pm Wednesdays. She is a road biking junkie who successfully completed the Snowbird Hill Climb last year and plans to ride LOTOJA (Logan to Jackson Hole) in 2009.