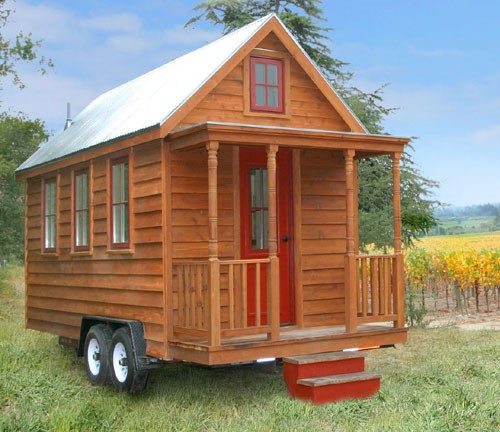 I was living with my two sisters, my niece and nephew, and my cousin when I decided I was going to build a tiny house. Living with all those people, even though they are wonderful and I love them, factored into my decision to build in and live in a tiny house.

We were living in one half of a duplex that was occupied by our landlord in the other half. It had originally been built by a polygamist for his literal sister wives. The electrical in our half of the house was a danger to all. It was miserably cold in the house in the winter and really hot in the summer. Most the rooms didn’t have a decent window. The backyard was filled with the landlord’s belongings.

I wanted my own space. Something peaceful and beautiful with good insulation and lots of natural light.

But I didn’t want to be tied down to any one location. I didn’t want to have a mortgage. So I daydreamed. About yurts, cabins, tepees, house boats, volkswagon busses, and tiny houses built on utility trailers.

I had been reading about tiny houses on Treehugger.com and had found the Tumbleweed Tiny House Company and looked at their tiny house plans like some crazy stalker lady.

Agonizing over which plans to buy, I finally committed to the Lusby plans. Yes, the Lusby plans were the plans for me. Mostly because they were $100 off. If you bought the plans that week, they also threw in a ticket to a tiny house workshop in Santa Rosa.

I didn’t know it at the time, but this also was the beginning of some change over at the Tumbleweed Tiny House Company.

I went ahead and told everyone I knew that I was going to build a tiny house. Repeatedly. Most people didn’t care. Some people laughed. A couple people told me I couldn’t do it.

I bought a brand new 2013 utility trailer from Innovative Trailer in Richfield, Utah. This definitely meant I was building a tiny house. My uncle, who is a contractor, said he would help me build the tiny house. He said it would only take a month of 40 hours per week.

That long! I mean, I wanted to be in my house by Halloween. I guess I could wait till Thanksgiving. My uncle and aunt had plenty of space and tools at their place. He would get it started and I would work on it on the weekends.

In my free time. Did I mention I had a full time job and was also teaching as an adjunct professor at a university? I had tons of free time!

Due to some unfortunate circumstances, we had to move out of the awful duplex at the end of October. My sister got a much smaller apartment and I stayed with her while construction continued. I couldn’t really work on the tiny house through all of November.

Then it was the end of the semester. Had to do grades. Then Christmas. Christmas is not the time to work on houses.

After the new year, I found out that my aunt, who was married to the uncle working on the tiny house, had cancer. So he was sort of occupied with other things. I was still teaching and working full-time.

I had no roof on the house. No big deal. I mean, I had a mattress on the floor of my sister’s apartment. No rush to finish my house. I would work on it all spring and summer.

One year after I had purchased the plans for the tiny house, I finally had a shell of a tiny house in the backyard of where I was living, so I could work on it at my leisure.

Okay, the 2nd year of contruction went really well. I got so much done. Put siding on the outside of the house, put in the insulation, covered the walls with gorgeous reclaimed redwood. Made a deck. My dad wired the house.

Progress was substantial. Then my sister bought a house with a long driveway and a carport and the tiny house moved again. There was a garage and tools and I did a lot of work on the house.

My sister’s house. It was cool because, well, I kind of got the best of both worlds. Tiny house construction with big house living. A place for all my stuff. That I was working on getting rid of. Just not quite fast enough.

To be continued next week