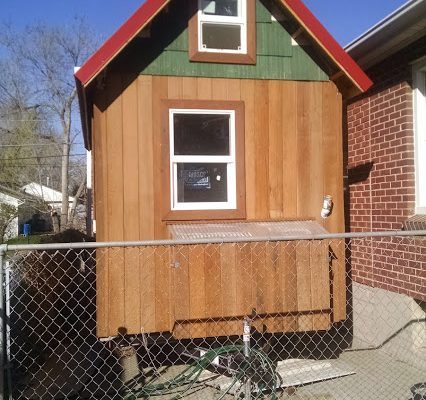 There are things during the 2nd half of the 2nd year that kept me from working on my tiny house to completion. This included living in my sister’s house with all the hipster coolness of having a tiny house and none of the inconvenience. I had my own room, a big kitchen, a bedroom door. I had a boyfriend who lived in Logan, Utah, which meant I was driving up there every other weekend. I had outdoor hobbies that pulled me away from home on the weekends. I had indoor hobbies that distracted me during the week. Progress on the house slowed down to a crawl. I would finish it and live in it at some point.

Then, seemingly out of nowhere, the decision was made to move with the boyfriend to Seattle with the tiny house. I had casually been trimming out the windows and completing the loft. Now I realized I must finish the tiny house plumbing and electrical. It was a mad rush, working on it in March, installing the composting toilet, continually looking at flooring and trying to figure out the water situation. I still didn’t have a door on the house. As I have mentioned, every time I got a door for the house, it was the wrong size. I could write more about how frustrating this was, but I don’t want to have a rage stroke. The point is that the house wasn’t done. There was still a lot of work to get it livable.

I started to look for a place to park the tiny house up in Seattle. Finding a place to park a tiny house, is, in my opinion, the hardest thing about tiny house living. Even though it is mobile, it isn’t really legal to park anywhere. The RV parks I called in Seattle didn’t want my tiny house there. It was too small. An RV, at a minimum, has to be at least 23 feet long. My trailer is a measly 18 feet long. The deck extends over the edge another foot. Parking it on land somewhere, like one of those islands that you take a ferry to, is allowed if you own the land. I finally found some people who would let me park the tiny house on their property, for a bunch of money, two hours outside Seattle. So I could pay the same amount for a one bedroom place and live next to the University of Washington campus(Go Utes) or drive four hours every day to live in a tiny house in god knows where with no running water.

I talked about this particular scenario with my sister, who lives in Texas. She would listen politely. Quite a bit. One day, she says, “What if I solve all problems? Send the house to Texas, I will finish the tiny house for you, and park it on my acre and a half property and show it off and get people excited about tiny houses.” This plan was very appealing. My sister wanted to build a tiny house but didn’t really have the finances to start one. She could finish mine and see how she felt about it. My parents live close enough to my sister and could stay in the house on the weekends. My brother – in – law was going to work for a real estate agent who was trying to build a tiny house park but didn’t even have one tiny house to show off. My tiny house would get finished and used and if I found a place to park it in Seattle, I could always come get it. After much discussion with my sister and brother – in – law, it was decided. My brother –in-law would come to Utah with a friend and drive it back to Texas in the 2nd week of May. I would pay for the gas for the tiny house trip. I could focus on moving to Seattle. I feel like you know where this is going. The 1st week of May, my boyfriend and I broke up. No point in moving to Seattle.

Next week, the tiny house goes to Texas!