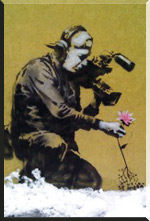 Do we know for sure it was Banksy? Certain Salt Lake artists have the skills to mimic. Does it matter? Banksy’s spokeswoman confirmed he made the paintings.

The artist announced his arrival in Utah sometime in the dark early hours the opening day of the Sun­dance Film Festival with a handful of murals and tags in Park City. An escalating twitter ensued. Reporters, residents and festival-goers fired off phone calls around town and the world, confirming locations in what became a city-wide graffiti Easter egg hunt. Blog posts of the images bloomed all over the internet. Rumors started. The premiering documentary about Banksy, “Exit Through the Gift Shop,” became one of the most discussed films at the festival.

Salt Lake made quick work of its graffiti. But in Park City, at the request of the public and business owners, officials agreed to live with some of the artwork at least for the festival. Cows, the coffee shop on which the now-famous filmmaker mural is painted, claims their mural is private property and will fight to keep it. The city planning department contends that because the art was not authorized by the business owner or the city, the mural falls under the category of graffiti rather than private artwork.

Artbusiness.com says of Banksy, “Over the past several years, his art has escalated in value faster than pretty much any substance known to man.” Last year Angelina Jolie reportedly paid nearly $400,000 for her three Banksy pieces. Was it reckless on the part of our city governments to paint over the works?

The artist clearly put a lot of thought into the murals he placed in our city, and they call forth a similar response from us.

We could keep the remaining murals because they’re smart, playful and beautiful, or because, as one Park City jewelry artist said when asked about the mural on Cows, “This city is about art. It’s perfect for us.”

Why would the cities so quickly erase the artwork? Is it dangerous, or a nuisance? Part of the problem is the word “graffiti”—generally the art equivalent of “litter.” Our cities have strict polices on how we deal with graffiti just as we deal with trash. The very policies that make Salt Lake and Park City such beautiful cities may be the same policies that don’t allow for sudden free murals by a world-famous graffiti artist. It’s one of those instances where one longs for a spirit-of-the-law approach, rather than the letter.

Banksy himself stirs up the issue, though. A big tag on a barn was clearly begging to be seen and then dealt with in the only logical way possible: fresh white paint. It was also meant, perhaps, to give a clear tip-off about the rest of the murals in town before they were quickly painted over. Certainly it was meant to create controversy and buzz for the Banksy film.

The other works though, seem more like gifts that Banksy gave our town.

In Banksy’s work the lines blur between art and propaganda, private and public, stealing and censorship. Who controls our public space? Who gets to put up the art/advertising in our public space? The people? The property owners? Our city governments? Banksy bypasses the normal protocol and we’re left to find out.