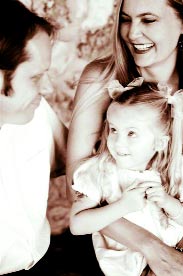 My baby just turned three. In three short years, she has become a little person with a mind of her own. No longer is she a baby or a toddler, now she's a little girl full of silliness, stories and songs. The change happens gradually yet incredibly fast. One day while grocery shopping, I suddenly realized that I no longer walk down the baby aisle. She's outgrown diapers, baby food, bibs, and the formula supplement we had to use when breastfeeding alone wasn't sufficient. Now it's hard to remember mixing formula in the middle of the night.

"Baby" is such a short time in a life. I remember holding her and staring at her and having the feeling that the moment was frozen in time. Everything slowed down and became quiet. Or, maybe it just felt that way because I was so tired and months had become one very long day with an occasional nap or two. The funny thing is that you don't even realize when the transitions take place. I don't know when we started sleeping through the night or when I stopped buying baby food. It just kind of happened. Then one day, my kid had a birthday and I looked back and realized the whirlwind of changes our lives have been through in the last three years.

Three seems to be a good age. She's perfecting choosing some things for herself. For Halloween, she oscillated between wanting to be an ant or a ladybug; she decided on a ladybug and was very specific as to which one as we looked at costumes online. She chose to go to the aquarium on her birthday and informed us to "be careful of sharks, 'cause they might bite you! But stingrays are nice, he let me touch him and he's so soft." (We won't tell her about recent freak stingray attacks.)

She's finding out that she has an effect on the world around her, specifically Mommy. She'll push the rules just enough to say "Does that make you angry?" then run over and give me a hug and a kiss and say, "Now you are happy. Does that make you happy?" She defines her own emotions, "I'm sad, I need a Kleenex; that will make it better."

For her, things need to be done in a very specific order. She hasn't outgrown a bottle at bed and insists on "a tiny, warm bottle" that she personally puts in the microwave despite the fact that we have a much healthier bottle warmer. She pushes the 3, then the 0, and finally the start button. No one else is allowed to open or close the door when the bell rings. She knows what everyone else wants; "Daddy wants to push me on the swing." And she struggles a bit with the idea that people might want something different than what Aria wants. I suppose this is typical narcissistic three-year-old behavior. Conversely, she is learning empathy and compassion and will note when someone else is sad and try to comfort them. When she is the cause of the sadness and the situation is explained to her, as in "How would you feel if Sarah took your favorite toy?" she gets a look of recognition and will usually say, "I'm so sorry."

I'm looking forward to next Christmas and watching her exercise the spirit of giving. I hope to instill in her the idea that giving is better than receiving. She gives me the gift of reliving my childhood, much laughter, and circling around the living room as a family singing "Frosty the Snowman" (she really has a thing for Frosty). Although she's no longer a baby, she will always be my Buddha Baby, my little teacher even when I blink and open my eyes to find that she's 6, 10, 20….

Kindra Fehr is an artist and mom to toddler Aria Hancock. She co-instructs the Salt Lake Art Center's KidsmART program.