Conversation is more important than steering the beast

Two months after I stopped driving, I decided I wanted to be a Lyft driver. I had taken Lyft a number of times and encountered a couple of interesting drivers. The first was an 80-year-old man who had retired but liked to drive, and to fish. He had fished in one of my favorite streams, the Upper Weber, where I had fished for six years. In years past, each of us had caught all manner of trout and a few grayling that had escaped from Sand or Dollar lakes.

Another enchanting ride was with a driver who was French. We conversed, and he allowed as how my French accent was perfect. I wanted to engage him in conversation longer but we had reached my destination, Foothill Shopping Center, and he had gotten paged by a new customer.

I’ve been thinking back over the years about cars I have owned.

My first car, in the mid-’50s, was a 1947 Willys Jeep with a detachable wooden body. It stood out in the parking lot of Mamaroneck High School and attracted the attention of a couple of girls. One of them became a girlfriend. She had never ridden in a Jeep with a wooden body; in fact, there were likely no other cars like it in all of Westchester County. I was never sure if she was attracted more to my car or to me.

During medical school I drove a VW bug which I planned to sell before we left Cleveland in a new Volvo station wagon but the engine froze on an interstate before delivery (I had forgotten to check the oil) and consequently the deal was scotched.

The Volvo lasted through my internship in San Francisco and a year on the Wind River Arapahoe Indian Reservation.

I was in the Indian Health Service as a general medical officer. Unfortunately, as I was driving across the reservation at dusk one day in a government Chevy I hit a free-range horse. The car sustained significant damage and the horse died, but I was uninjured because I was wearing my seat belt.

In 1974 I bought an orange VW Vanagen. Within a week my father, concerned about the well-being of his two young grandsons in the event of a head-on accident, arrived from New York and commissioned a westside foundry to weld a 600-pound tire rack to the frame. From then on, the van rode with a 20-degree forward slant. When we drove cross-country in 1979 it evoked quizzical glances in every state.

In more recent years my wife drove a Prius and I drove a tiny Smart Car, pretending that Salt Lake was “a little bit of Paris.” The Smart Car proved to be a disappointment so when my son leased an all-electric BMW i3, I followed suit; the furthest I ventured from home was to Upper Provo to fish (45 miles). When that lease was up, I switched to a Nissan Leaf.

In the first four months, I hit a curb, causing an immediate flat—three times. The third time I also damaged the wheel; the repair cost $680. When the last incident occurred, I was despondent. My wife had been saying for years that I should stop driving. I looked at the tire, called the emergency services, and waited for the tow truck to arrive. I knew my life had to change. I called my wife. “Jody, I am going to stop driving. I had another curb accident and I am done,” I said. I could hear her breathe a sigh of relief—that I had decided to give up driving and that I had told her the truth.

A few years earlier I was driving her Prius to a fishing trip near Strawberry Reservoir. I hit the driver side mirror on a construction cone; it hung by a wire. When I got home I said, “You won’t believe what happened. As I was driving, a semi hit a construction cone. It flew into the air and hit the car.” The next day she said, “That was a bullshit story, wasn’t it.” I admitted that it was and I knew from then on I had to tell the truth.

The second flat ended my tendency to prevaricate; the third ended my driving career. When I called Nissan, I was told we would be obligated to pay for the full three-year lease. My wife, more forthright, then explained to the dealer that we had to turn the car in because I had been diagnosed with Parkinson’s Disease and no longer should drive.

Thus, we became a one car family. Aside from it being a necessity, it felt environmentally responsible. I quickly discovered several ways to getting around in the city. On short order I memorized the utilitarian bus routes within walking distance of my house. Utah Transit Authority had done a reasonable job figuring out how to help those of us who are carless. Within a two-block range I could catch a bus which took me most places I wanted to go.

I could find the best route to any destination by entering starting and ending locations on my computer or phone and email myself the bus number, where to catch it and how long it would take to reach my destination. The description also showed me the route and distance to the bus stop. I created a travel folder in my email. Bus drivers were generally genteel and always managed to have the bus stop directly in front of me. I use a Farepass card. Your just show it to the reader as you enter; you add more credit at the UTA website on the Internet. 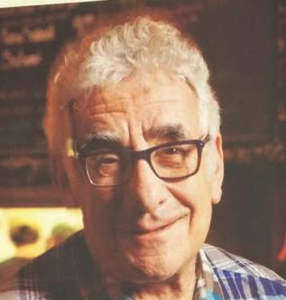 The other day I sat opposite a young man who said to me, “You look like an actor.” He got out his cell phone and showed me picture of Eli Wallach. Off and on, in years past, I’ve been mistaken for Sidney Pollock and, locally, for Tony Caputo.

I’ve also serendipitously caught rides home from friends—from The King’s English, the Broadway Theater, a lecture at the University, the Bee, the First Unitarian Church and more. It is a nice way of catching up, having pithy conversations on the fly.

I don’t miss driving. But I do think, off and on, of becoming a driver. My wife has considered doing that, too. She says I could be in the passenger seat and be responsible for conversation, which, after all, would be the real reason I long to “drive” for Lyft.

Louis Borgenicht is a retired pediatrician and writer, primarily of letters to the editor.

POSTSCRIPT: Last month Lou received in the mail an invitation to apply to drive for Uber, but says he has become, instead, an avid backseat driver.