Atlas: Following the Way of Our Bones

Through mindful posture, we can communicate to others how we should be regarded and treated. 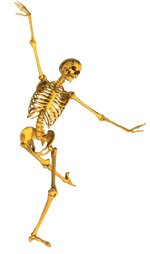 The bones in the spine that determine the position of your neck and head are called the atlas. Like Atlas in Greek mythology who held up the world, this atlas holds up the globe that is your head.

The bones in the spine that determine the position of your neck and head are called the atlas. Like Atlas in Greek mythology who held up the world, this atlas holds up the globe that is your head.

An atlas, of course, is also a collection of maps. Maps indicate a path for a journey, and guide one’s perspective. They imply potential: A map is used by someone about to embark, or by one who is lost and hopes to find context.

An atlas also signifies the future. Though used in the present, it is the means to orient one toward an eventual destination, a goal.

The spine’s atlas orients us, gives us our perspective, and sends us forward into the future. If your chin is up, the horizon before you is wide and open. If down, your horizon is small and narrow.

The atlas of your spine also provides others with a map of who you are. A straight back and chin-up posture indicates strength, confidence, pride and vitality. A stooped posture is read by others as defeat, decline, fear, weakness and helplessness. People are attracted to those who stand up straight and look up. They avoid those who look beaten, helpless and needy.

The map your atlas provides to others is also your own map, the self-fulfilling prophesy of who you are, of what psychological and spiritual territory you inhabit, and of your intended destination. When you straighten up, you show yourself a way forward and include in your view an open and full horizon. You become confident and say ‘I am not afraid, I am strong—walk beside me and I will be good company.’ When you are slump-shouldered and small, when you curl inward, you say to yourself, ‘I am sad and lonely—poor me; I am weak and need to be carried.’

Posture is an expression but also a means. Through mindful posture, we can become how we stand and move forward, we can communicate to others how we should be regarded and treated, and we can attract or repel those around us. This is how we follow the map of our bones.

Chip Ward, co-founder of HEAL Utah, now writes from Torrey. He is the author of Canaries on the Rim: Living Downwind in the West and Hope’s Horizon: Three Visions for Healing the Land.