The Artist at Home: John deJong

The studio of John deJong is an extraordinary place—an emanation of an extraordinary mind. I have visited many artists’ studios, and I have one of my own, but the sheer magnitude and variety of John’s output and collection of work is, to say the least, both impressive and overwhelming.

Trained as an industrial engineer, and the veteran of many years of Burning Man both as an effigy builder and a volunteer with Burners Without Borders, John works exclusively in three dimensional space, experimenting with how to divide it and how to fill it up.

He’s been collecting and modifying everything from military surplus aircraft instruments to Happy Meal toys since his college days. An amateur photographer but a stranger to the darkroom, he found unlimited freedom in his first digital camera. He says his first photography show should have been called “Port, Pot and Photoshop,” reflecting the mixture of his working materials, but he was running for the Salt Lake City School Board at the time and thought of a less descriptive title. 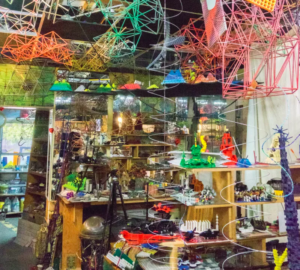 DeJong’s inner architect has been nurtured by bags of miscellaneous Lego pieces acquired at yard sales and Deseret Industries. He builds temples, altars and other Escheresque structures, challenging himself to use only the pieces in each bag.

John’s father was a mechanical engineer working in the steel industry. The family moved around a lot, ultimately landing in Provo, but not before John and his sister got to visit the Gateway Arch in St. Louis as it was being constructed. “I remember seeing the top section, which was17 feet by 17 feet by 17 feet, going out of the plant in Des Moines,” he says. This was a pivotal moment in his life—“the Arch is truly monumental and inspirational. Everyone should visit.”

How about showing his art? “I’ve thought about having an ‘open studio’ but two or three years ago I decided to be a ‘5% artist’—you know that quote by Thomas Edison about invention being 5% inspiration and 95% perspiration? Well, to hell with the 95%; it feels really good to be doing this just for me.” Access to John’s studio is by invitation only.

The collection has moved several times over the years, variously inhabiting rooms in a house, a garage, and rented studios before settling in its present location in a building on Broadway. “ 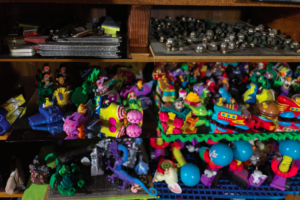 I’ve always expanded to fill the space available,” he admits. “You know that KonMari decluttering book that’s so popular? In getting rid of things it asks you to pick up the object and ask yourself ‘does this bring me joy?’ —well, all of it brings me joy.” He smiles.

This article was originally published on October 30, 2017.