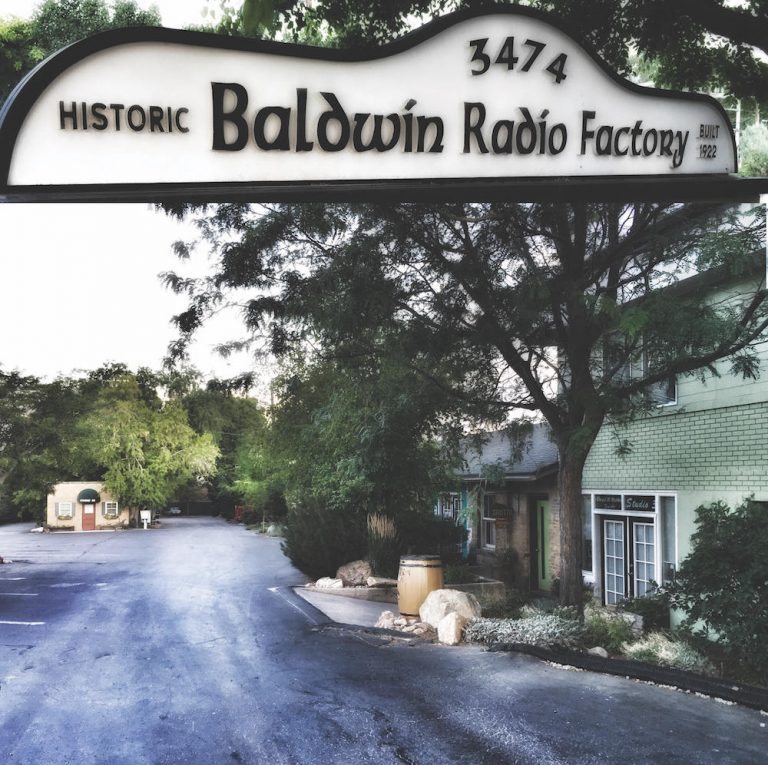 A hidden gem resides just below Millcreek Canyon. Built in 1922 by Nathaniel Baldwin, the inventor of headphones and other sound products, the Baldwin Radio Factory is located 3474 S. 2300 East in Salt Lake City, soon to be City of Millcreek.

“Artists have been using some of the spaces for working studios since the 1960s—I know that a potter, a painter and a stained glass artisan all had studios in the building at one time,” says Kevin Flynn, who purchased the building in 1996. At that time, most of the space was occupied by Radius Engineering. When they moved out, Flynn remodeled it into 20 art studios and opened his doors in 2005.

“I dubbed it the Flynn Artipelago, since the studios were like an archipelago of creative islands in a sea of urban sprawl. Recently we started referring to the art space as the just the Baldwin Radio Factory to highlight the historical significance of the building,” Flynn says.

Flynn’s affinity for the factory and his vision for an art collective comes from childhood and the time spent with his grandfather, noted abstract expressionist painter Don Olsen, whose work is in many private and public art collections in Utah and beyond.

Flynn began his own business as an electronics engineering consultant in 1994 and was looking around for an office. “I have a love of art, architecture and old buildings, and stumbled across the Baldwin factory while looking for a parking place during the 4th of July breakfast at Evergreen Park next door,” he recalls. “I immediately fell in love with it and envisioned it as a future art community. I contacted the owner, and we worked out a deal for me to purchase it through loans, savings and tapping my retirement account. The building was run down and in need of a lot of maintenance. I immediately planted trees and landscaping, repaved the parking lot and painted the front building.

The “building” is actually a complex of four structures. The building that faces 2300 East and houses Roots Cafe and the Old Flamingo, was originally the front office for the administrative functions of the Baldwin Radio Corp. The long narrow building that extends to the west of the front office is the factory assembly line building where the headphones and radio parts were built. It is longer than a football field at 324 feet, but is only 32 feet wide.

Three detached smaller buildings are on the south side of the factory. One housed a big coal burning boiler that provided steam heat for the factory. Old photos show a tall smokestack next to the boiler room, of which only the base remains today. Another building housed the restrooms for the employees, who numbered over 500 at one point. The middle building was a fuel depot for the delivery trucks.

The Baldwin Radio Corporation fell victim to the Great Depression and went bankrupt in 1929. Nathaniel Baldwin and his family lived in the front building during the 1930s, and after that the building had many various tenants. The International Institute of Hair Design occupied the building from 1978 to 1999.

Flynn calls himself an “artrepreneur,” and it is his intention to make the complex the center of creativity and art in Millcreek. Flynn is also a musician, playing saxophone in the Svengali Jazz Quartet, the Rockamatics (classic rock) and the Flynnstones (jazz/rock/funk).

He aims to attract artists who are serious, hard working and from diverse disciplines. Current residents include painters—landscape, still life, impressionist, abstract; glass and mixed media artisans, photographers, musicians, composers, and a metal sculptor. Vitalize Healing Arts Studio  also lives there, offering yoga, meditation and massage along with community offerings and space rental for events. Fronting the complex are Roots Cafe, popular for their tasty and healthy breakfasts and The Old Flamingo, the vintage upcycled furniture and home decor shop.