Art in the City: Awaiting

Ernesto Pujol’s upcoming performance is art for the soul of the city. 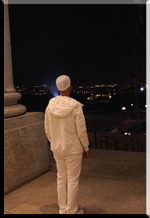 On Thursday April 8th in the late afternoon, over 40 people dressed in white will begin silently walking from various locations all over Salt Lake. They will head through the city streets, crowds, and rush hour traffic to Capitol Hill where they will gather for a moment of stillness, and then as the sun sets they will begin ascending and descending the south steps. The ritual/performance will last for 12 hours, from sunset to sunrise with walkers moving silently up and down the steps until 7 a.m., when the participants disperse back into the city.

On Thursday April 8th in the late afternoon, over 40 people dressed in white will begin silently walking from various locations all over Salt Lake. They will head through the city streets, crowds, and rush hour traffic to Capitol Hill where they will gather for a moment of stillness, and then as the sun sets they will begin ascending and descending the south steps. The ritual/performance will last for 12 hours, from sunset to sunrise with walkers moving silently up and down the steps until 7 a.m., when the participants disperse back into the city.

The performance, titled “Awaiting,” is the work of Ernesto Pujol, an internationally celebrated performance artist. Cuban-born, New York-based, nomadic by nature, Pujol is a visiting artist at the University of Utah this spring—the first recipient of the new Marva and John Warnock Endowed Art Residency Program. For the performance he is collaborating with Utah artist Rosi Hayes, who is creating a meditative sound installation to accompany the silent walkers. He’s also working with his U of U master performance art workshop students, and various artists, students and community members who responded to an open call to participate in the performance. His intention for the piece is to create a space of intimacy and contemplation for both participants and the community, and is designed to speak to the essence of the city.

Pujol speaks with a carefully chosen vocabulary. There is nothing superfluous in his language, which makes one think his words come from the same place as the subtle gestures of his performances. He wishes to bring the viewer in through their quiet nature, rather than to hijack you with spectacle. There is such a grace to this artist—his features are elegant with long black eyebrows, a fine nose and dark eyes. His fingers are long and expressive, but disciplined in their movements. His demeanor is humble and compassionate in a way befitting a man who spent part of his life as a Trappist monk and is now a practitioner of Zen Buddhism.

Pujol describes himself as “a performance artist who’s always looking for the defining cultural traits, qualities, emotions, the bodies” of the places he visits. He travels the world with his nomad’s sense of curiosity about the cities in which he stays and works, and asks questions about the geography, the people, the history, until he reaches a deeper understanding. He has worked in cities from Skowhegan(in Maine) to Chicago, to Tel Aviv. After visiting so many different places and really asking questions, the distinct characteristics of the cities begin to become readable. The first time he visited Salt Lake City three and a half years ago, he had a distinct impression.

“It struck me as a place of waiting,” he says.{quotes} He finds it’s a distinct feeling that Salt Lake exudes, and he attributes it to the “millennial, utopian culture base” that can be traced back to the city’s founders. The early pioneers, he points out, came out of a kind of Protestant reformation that says labor has to be virtuous—”that you labor with virtue and then you stand back and you surrender, and then there’s this gap where you wait for a blessing of the Universe.” {/quotes}The city was also founded with a sense of “waiting for the return of a spiritual figure that is transformative of everything and everyone, so that they wait, and creation waits, in that kind of biblical sense.” There’s also, Pujol points out, “the military culture of the region that is loyal, patriotic, has a ton of children out in the Middle East and waits for peace, as well as their return safe and sound without missing limbs, without post-trauma­tic stress.”

He feels Salt Lake is “at a crossroads, between the past and the future. Utah is in a liminal place: does it choose the past, and therefore try to keep restaging the past, or does it enter the future bravely, open, and permeable?”

As for why he chose Capitol Hill: “I was struck by the Hill,” Pujol says, “as a high place in the city, a monochromatic background: the stone and marble and concrete. And as a kind of Jacob’s Ladder of yearning—that vision of seeing bodies move up and down between earth and sky. Angelic bodies.” He likes the position of the secular building in the religious state. While his work has a deeply spiritual feel, Pujol has tried to create a neutral space for the spiritual aspect of the performance.

“Can we present an experience,” he asks, “a kind of humanistic spirituality, a set of ethics outside of religion so that we admit that everyone seeks, everyone yearns, everyone has this ascent and descent?” The Jacob’s Ladder image is not, he says, meant to be “literally angels or spirits, it’s simply a kind of language of the human condition.”

“Awaiting” offers its subtle transformation on several levels: that of the individual performers, the performers as a group, the public who come throughout the duration to witness the performance, and then, in reflection, the city itself. In a way, it is Ernesto Pujol’s work to hold Salt Lake’s vulnerable belly in his hands, and then to create artwork that reveals us to ourselves in a new way. It seems that we are not only deeply seen by him, but also cupped very gently in those kind hands.

After his residency in Salt Lake, Pujol goes to Salina, Kansas; then Honolulu, Puerto Rico, and back to New York to rest and digest.

April 8, 6 p.m.: View the beginning of the piece at the capitol visit throughout the night, and return at 7 a.m.
April 9 for the culmination.
Docents will be available to answer questions.
The performance is free.
For more information on the artist and performance: WWW.AWAITINGIN-SALTLAKECITY.COM.
Wednesday, April 21, 6:30 pm.: post-performance conversation at the Utah Museum of Fine Arts (U of U campus).