Transitions are rarely easy. We come into this world in a welter of drama—one way or the other, exiting the womb is a pretty big deal. Leaving this world is also uncomfortable, and in the Western nations we’ve developed quite a phobia regarding death. Jude Higgins, cultural anthropology professor at Salt Lake Community College and founder of Help from an End of Life Doula (HELD), is here to change this unhelpful perception. CATALYST sat down with her to find out more about the process of dying with clarity, control and dignity, and to learn more about “death doulas.” 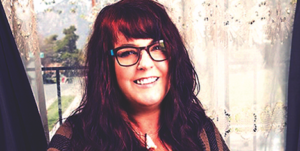 CATALYST: Tell me about the concept of  “doula.”  And how did you become a death doula?

JH: Doula is a Greek word that literally translates to mean “woman servant.” But doulas are now any gender or sex. The “death doula” is modeled after the birthing doula, which most people are more familiar with. When you’re pregnant,  a birthing doula will coach you and support you and help you with the process. A death doula helps you with dying. I actually trained as a birthing doula. I have assisted my friends with their births, and it was an amazing, beautiful thing, but in the end it didn’t feel like a good fit. It didn’t resonate with me.

I trained as a death doula under Henry Fersko-Weiss, who created the first end-of-life doula program in 2003, and cofounded the International End Of Life Doula Association (INELDA) in 2015. Soon after, I was approached by a hospice group that wanted me to help write a training program for death doulas, but they wanted to keep all of my intellectual property. Instead, I started to develop HELD using my own academic knowledge and knowledge of facilitation to improve what I’d already learned. My goal as an anthropologist is to change our cultural perception of death, and to give people more power and autonomy in their end-of- life transition.

Americans have a pretty deeply ingrained phobia of death. How do you address that?

The phobia of death is so prevalent. We use words like “we’re gonna beat this illness” or “fight this” and then when someone doesn’t win—which is inevitable, because we all die at some point—there’s a sense of failure. So not only are they in their end stage of life, but they feel like they failed and let everyone around them down.

If we recognize that we will all die, it shouldn’t be taboo to talk about it. If we can face it and plan around it, we can have more control over it.

Most people say they want to die in their homes, but 70% of Americans don’t. And they can! Death doulas help you plan a legacy project. What do you want to leave your loved ones? What do you want your memory to be? And that can be as creative as you want.

So it’s an empowerment?

JH: Oh, yes. And with a legacy project we help people move through any feelings of guilt or shame or regret. Sometimes through guided meditation, sometimes taking a life history, sometimes just talking—there are a number of ways. We document these things if people want help doing that. We help them figure out how they want their vigil space to be. Do they want music? Do they want scent? Do they want their dogs on the bed? Do they want to be touched—or not touched? What are the protocols and rules around that space for them? We get all of this information and then help them follow through when they’re in a stage where they can no longer speak for themselves.

We also assist the family and help them move through grief. And sometimes we just do dishes! Anything to relieve stress. We hold a space that’s uncomfortable for most people, because we’re right in the middle. People are more comfortable with black and white—being alive or being dead. But the transition space is a very difficult space to hold.

Do you have personal experience that informed your decision to become a death doula?

JH: Oh, yes. I ran away from lots of death. My mother was dying for my entire life with her. I ran away until I was forced to face it, because I was the only one available to take care of my father. So until that time, I didn’t recognize the gifts that came from it. My father passed two years ago this December.

NELDA is the biggest one in the country right now, but it’s mostly on the East and West coasts and online. HELD has the Rocky Mountain area, and we are arriving at a very good time. There’s a cultural shift on death. In 2017, TIME magazine named death doulas as “a career to watch out for.” Personally, I’d eventually like to develop “flow of life” centers where there are birthing doulas and midwives and death doulas and hospice all together.

I’ve based HELD’s certification on my work in curriculum and education, writing classes, as a professor for many years and being familiar with student learning outcomes and creating classes. HELD death doulas are trained to get their clients to a point of grounded clarity. That doesn’t mean they’re feeling great about dying, it just means they’re really clear about what they want—clear about their legacy, their life history, potential regrets, and how they want their vigil space.

We first get students to a point where they can volunteer for hospice. Then we have a more rigorous certification program, where mentoring is involved and you begin to work with clients.

One of the biggest skills you need as a death doula is to be a good listener. We teach deep listening skills and how to ask open-ended questions, how to create a space where your client is comfortable, and creating rapport. You can’t just sit down with someone and say “hey, let’s work through your guilt and shame and regrets”—nobody likes that! But there are ways that we can teach people how to do that.

We use a home in the Avenues that is part of the Golden Rule Project for our trainings. Candidates will enter a room, and we have them observe their surroundings and see what they can figure out about the person who lived in that room, and create a vigil project around it. They’ll work together and try to get a sense of who that person was. We also have candidates write their own vigils. That’s a great question to ask: “what do *I* want?”

Ultimately, my goal is to see more death doulas everywhere, alleviating maybe not the fear of dying, but making it more normalized in our culture. The transition is a beautiful, sacred experience and it is empowering for people to create what they want around that. It might also be hard and ugly, but it is so important for people to feel like they have agency and choice.

Alice Toler is a sculptor, light artist and regular contributor to CATALYST. The next HELD training is November 9-11. MyDeathDoula.com/

This article was originally published on September 30, 2018.