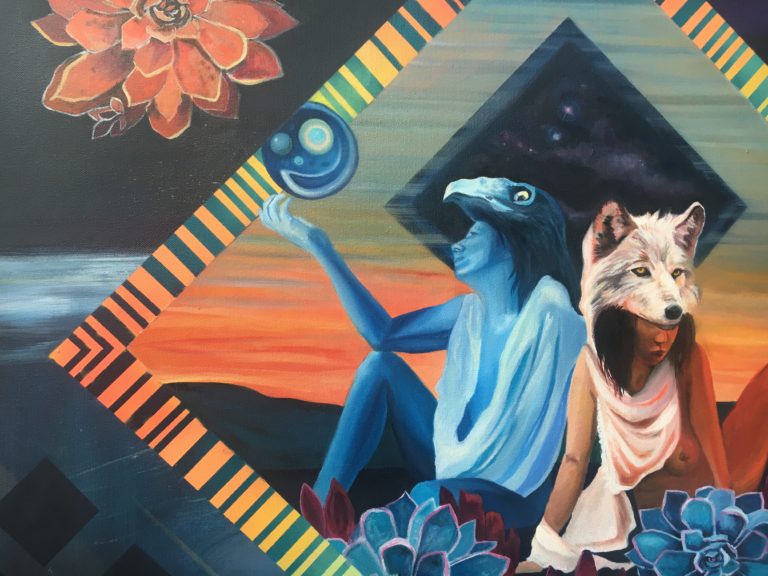 Last week’s urge for telling stories bleeds into this week, inspiring a wide range of narratives, some of which can be classified as tall tales about big fish, while other tales simply stick to the facts. While this penchant for narrative is pervasive and perhaps entertaining, it isn’t easy discerning fact from fiction, and that inability to get to the truth is certain to cause meltdowns, yours or others’. The problem with all these stories is that we’ve been in a cultural spin cycle for so long (way before Mr. Trump declared “spin” a government policy) that it keeps getting harder and harder to remember that truth isn’t relative. Opinions about how to interpret facts are, yes, but not truth itself. For example, climate crisis is reality. Yet how we react to that truth has morphed into endless and mostly bogus spin, or, politely put, “myriad interpretations,” all based on the prime motive of distorting reality for personal, political, or corporate purpose and profit.

I’m thinking about this not only because we’re stuck in an endless loop of lies, but because I am also dumbfounded by the ongoing struggle between fact and fiction. Last week, I heard someone describe Mueller in a stunning way: “His brand is truth.” His brand is truth? When did truth become a brand? Did I miss an important transition? Or am I still not fully adjusted to the deep rabbit hole of Wonderland?

Don’t misunderstand: I know reactions to reality are human and they occur every minute of every day—that’s life in the emotional world, as Spock might advise. And as Kirk or McCoy would point out, sometimes those feelings are valid because they move us into necessary action; when those feelings are a response to danger, I’m glad for a quick response. But I’m not happy when the truth is distorted for personal gain. The constant erosion of truth mirrors the deadly soil erosion happening in too many vulnerable places on our home planet; literally and figuratively, our ground of being is being worn away, which will ultimately lead to an awful fate.

In case you’re wondering why I’m harping on climate change and truth, I’m reading The End of Ice: Bearing Witness and Finding Meaning in the Path of Climate Disruption by Dahr Jamail. I happened upon it through the review and interview linked below, and while the book is a terrifying and heartbreaking read, Jamail’s work illustrates how the climate crisis mirrors our global psychic condition, a condition we bear witness to every day as all the structures of our world—physical, mental, emotional, and spiritual—are challenged by the great global catharsis we are currently caught in; a crisis that isn’t going away anytime soon.

From an astrological perspective, Jupiter is the source of storytelling; it’s currently retrograde in Sagittarius, the Sign that loves a yarn, and this week, Venus, the goddess of love and beauty, currently in Aries, trines Jupiter, forming a positive interaction with the potential to weave the fabric of adventurous romance. Just be aware that we are also in the midst of a Mars/Jupiter opposition, a tense combination that teeters wildly from one extreme to another, so anticipate lots of mood swings and indecision about what’s next.

Jupiter is also within range of a square to Neptune, a fractious interaction that interferes with the ability to tell the truth without embellishing the facts. This square will be with us for the next couple of months; it’s exact the second half of June, but given the retrograde cycles of both Jupiter and Neptune, its influence is with us until November. As this square coalesces with the mood swings of the Venus/Mars/Jupiter interaction, you could delude yourself about love, so pay attention to the details of your romantic escapades and whether you’re spinning a love story based on wishful thinking or on reality.

For those who simply want life to return to normal—that is to say, want a return to the regular routines of daily life without a lot of fuss and muss—this week is your best shot. The ongoing Saturn/Pluto conjunction, retrograde in Capricorn forms a trine to the Sun in Taurus this week and next, and as part of Saturn’s and Pluto’s retrospective as well as the positive interaction with the Sun, there is a potential for a grounded, almost realistic (but not too pessimistic) approach to regular routines. This powerful trine also supports efforts to plant gardens of every variety, whether actual flower or vegetable gardens, or multidimensional expanses of creative endeavors

A Mercury/Uranus conjunction in Taurus amplifies innovation, especially when it comes to creative ideas. Mercury symbolizes the mind. Uranus signifies innovation, which means you can use this positive interaction to conjure creative ideas. It’s in effect through Sunday, so whether or not you have access to a physical garden, use this powerful mental might to plant gardens of ideas about how you can move forward on innovative footing.

We are at a crucial turning point in our evolutionary process and we need to rise to the occasion of our most conscious selves. Each of us is facing the challenge of soul-forging, especially as we deal with the dilemmas of our times, difficulties that express themselves as a battle between awareness and ignorance, apathy and concern. As you continue to write your personal story, be sure to spend a moment on how you want to handle your participation in the narrative.

When Jamail was asked how he deals with “the weight of this material” about climate crisis—how he copes with the reality of the problem—he quotes Vaclav Havel: “Hope is not the conviction that something will turn out well but the certainty that something is worth doing no matter how it turns out.” These words offer a brilliant antidote to the hopelessness many of us are now wrestling with… wise words to keep in mind during the coming weeks and months.

Aries March 21-April 19
If you are willing to tell yourself the truth, you’ll find it much easier to find self-acceptance in the moment. This is not so much a “be here now” solution, although it will enhance your ability to be present. Being absolutely honest with yourself simply has the power to slough off pretense, and to inhabit a state of being that only increases your personal strength and power.

Taurus April 20-May 20.
You’re inspired by a wealth of ideas; it doesn’t matter that you don’t know where to start. The good news is that you’re out of the doldrums and into activity, but before you spring into action, be honest about your priorities and where you would be happiest spending your time and energy. There’s no need to limit yourself to one choice; just be clear about what matters most.

Gemini May 21-June 21
It wouldn’t be surprising if significant others take your inventory and present you with an honest appraisal of your situation. I’m not suggesting they are correct and I’m also not suggesting that you follow their advice. I am, however, advising that you listen closely to what’s being said, because even if you don’t agree with most of it, nuggets of gold are hidden in their words—and you’ll definitely benefit from the conversation.

Cancer June 22-July 22
It’s a deeply emotional week, and although I’m usually on the side of free expression, at this particular moment, less might actually be more. It’s not that you’re lying to yourself about what you feel. But it might be wiser to err on the side of caution, if only because you’re processing through a wide range of emotions and something that feels true this week, may not be true next week.

Leo July 23-August 22
Anticipate surprising developments in your career or in other areas where you’re seeking recognition for your accomplishments. This isn’t necessarily about awards or even about getting a promotion, although both are possible. It is about sudden opportunities for innovative progress, including the inspiration to move into a new direction—one that might bring you greater joy.

Virgo August 23-September 22
I realize that you have the ability to plant both feet firmly in the position that there are many ways of interpreting the facts—and most of the time I would agree. But it might be an interesting process for you to consider that sometimes there aren’t a ton of interpretive possibilities. Or put another way: sometimes a cigar is just a cigar.

Libra September 23-October 22
There are still great stories to tell, but try not to tell yourself a story that you want to hear just because it more easily suits your picture of reality. Instead, be honest with your significant others and with yourself about what you need to feel safe and secure. I’m not advising a slash-and-burn attitude. I’m simply suggesting you allow truth to clear the air.

Scorpio October 23-November 21
Because you are so naturally attuned to nuance, it’s often hard to decide what’s true and what isn’t. That skill you have to feel beneath the surface of things is a great gift, but it can get in the way, especially if you aren’t telling yourself the truth about what you want and why. Be willing to examine your motives and that self-awareness will facilitate making meaningful choices a whole lot easier.

Sagittarius November 22-December 21
Be completely, absolutely, and utterly honest with yourself about your relationship to money. And if you find out that you like money more than you have previously admitted, then undo those vows of poverty or putting others first, roll up your sleeves, and get to work amassing your fortune. This isn’t about right or wrong; it’s about acknowledging what’s important to you.

Capricorn December 22-January 19
Be unstintingly honest with yourself about what you want in a relationship, but try not to be impatient when others don’t respond with the same veracity. Not everyone embodies practical clarity the way you do, and while that’s a sad fact of life, it doesn’t mean that all partnerships are built on pretense. The ability to discern the truth and acknowledge it is privilege, not a punishment.

Aquarius January 20-February 18
You’re navigating some rough emotional seas, internal and external, and it’s never easy staying true to yourself in the midst of this kind of storm. But it might not be as big a storm as you think. Maybe you’re in turmoil because you’re not being truthful with yourself about the purpose of this journey—the storm might actually clear if you get clear about what you’re doing.

Pisces February 19-March 20
Several stimulating conversations could feed your imagination about what life would be like if only___ (please feel free to fill in the blank). Letting your imagination roam freely through the possibilities can be fun, but it can also bring you back to Earth with a thud, especially if you aren’t honest with yourself and what it will take to make those dreams real.