The Antiquities Act from Roosevelt to Obama

Europe has its castles; the United States has its majestic mountains, seas and more.

Of those 29 monuments, perhaps none stirred so much controversy as Bears Ears in southeastern Utah. Among the justifications for its protection is the high density of archaeological sites hidden among the red-rock topography of its 1.35 million acre boundaries, and the incidental looting that those sites began to attract.

Looting, as it so happens, was the impetus for the inception of the Antiquities Act. The late 19th century was a golden age of exploration in the American West. The rediscovery of ancient American sites revealed an increasing quantity of valuable artifacts, which became difficult to prevent from disappearing into the black market.

Concerned archeologists and conservationists labored for decades to attract federal support for land protection in the West. Eventually, political action ensued and a corresponding bill was drafted which landed in the sympathetic hands of President Theodore Roosevelt (a Republican). Without hesitation, he signed it into action in 1906.

The four-paragraph act confers executive authority to the President to proclaim public lands already owned or controlled by the federal government as national monuments. By so doing, those lands are protected by law from not only looting, but also unauthorized excavations for oil, coal and minerals.

The Antiquities Act became Theodore Roosevelt’s poetic legacy. He established the first 18 national monuments across the west during his next three years in office, protecting over 1.5 million acres of federal land.

During the century and eight years that have since followed, the influence of Roosevelt’s legacy has rolled forward through 18 administrations, dispersing a total of 157 national monuments across 39 different states or territories. An additional 45 monuments have also been established through acts of legislation in Congress (rather than by means of the Antiquities Act).

Both Republican and Democratic Presidents used the Antiquities Act in a similar fashion until after the next Roosevelt was in office. Democrat Franklin Roosevelt established 11 new monuments, and expanded 21 more for a total of nearly 3 million acres of protection. 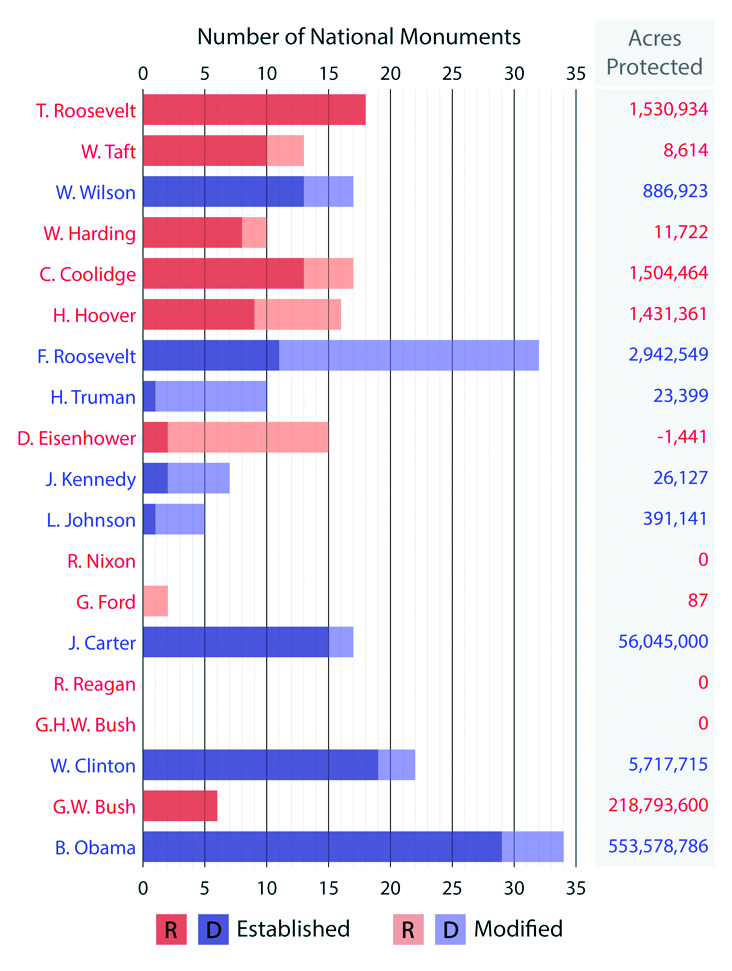 Afterwards, from the era of Roosevelt’s New Deal until the end of the Cold War, use of the Antiquities Act diminished substantially. This was especially true during Republican administrations.

Dwight Eisenhower established two monuments, and modified the boundaries of 13 more. In so doing, he reduced more boundaries than he expanded and became the only President to have a net decrease in the amount of total land protected.

Democrat Jimmy Carter was an exception during this era. In stark contrast to the administrations immediately before and after him, he established 15 national monuments and expanded two more for a total of 56 million acres of protection—far more land than any other President, including Obama. And all of it was in the state of Alaska.

“This may have been the most significant domestic achievement of my political life.” Carter wrote in his most recent autobiography. “Alaska had been admitted to the Union as the 49th  state in January 1959, when a debate began over how some of its vast federal lands should be divided among the indigenous Indians and Eskimos, deeded to the state government, or retained as national forests, parks and wilderness areas.” His efforts were extremely unpopular in Alaska, and he had to have extra security on his visits.

If the Antiquities Act was not a partisan issue before Carter, it clearly was afterwards. In response to the amount of national monument land protected in Alaska, a law was passed that required congressional approval for the use of the Antiquities Act in that state for any area larger than 5,000 acres. This emulated a similar law that was passed for Wyoming in response to the establishment of Jackson Hole National Monument by Franklin Roosevelt in 1943.

The next Democrat to follow Carter in the White House was Bill Clinton, who also used the Antiquities Act frequently. He established 19 national monuments, which at the time was more than anyone before him.

George W. Bush succeeded Clinton in office and became the first Republican to establish a national monument since Eisenhower in 1961. He also became the first President to establish a marine national monument. In fact, four of the six monuments designated by G.W. Bush are primarily under Pacific waters and account for all save 6,310 acres of the nearly 219 million acres of space that he protected.

President Obama followed with a variation on Bush’s aquatic theme by establishing the first marine national monument in the Atlantic Ocean. Furthermore, he significantly expanded two of G.W. Bush’s marine monuments that are established in the waters surrounding his birth state of Hawaii. Those three protections alone account for nearly 548 million of the 553 million-plus acres protected by Obama.

The other 5.7 million acres of land monuments established or expanded by Obama are about equal to the amount of land protected by Clinton during his eight-year term in office.

Size is not always important

But size is not the defining feature of all of Obama’s national monuments.

Several very small monuments were established by Obama to preserve the memory of individuals who pioneered efforts related to LGBT rights, women’s equality and workers’ rights, as well as the contributions of African American soldiers in our nation’s early conflicts. And in tribute to Martin Luther King Day, he most recently established his three final small monuments at locations in the South that are important in the history of American civil efforts. These monuments are small in size, but they are enormous in significance.

In his post-presidency years, it is likely that Obama will continue to be a meaningful figure for minorities in America. It is also likely that he will be found on occasion in snorkel gear exploring the underwater landscapes that he has now protected, just as perhaps Roosevelt explored the vast western landscapes that he preserved.

Either way, his legacy in regards to the Antiquities Act will be prominent, and also personal.

Robert Lawrence is a biochemist at Arizona State University and  a former Utahn.

This article was originally published on January 30, 2017.