From Utah to NYC and back to Utah: Christopher Harrison’s antigravity yoga is finally arriving home. And it looks like an awful lot of fun.

There is really a strong work ethic in the Mormon community. Every day we would get up in the morning to do our chores and my mother especially taught me to bring things to completion,” Christopher Harrison tells me over the phone from New York City. “Combine that Utah ethic with New York and you are bound to find success.”

As he speaks I imagine Harrison dressed all in black with a huge grin on his face, just as he looks in his many recent television appearances. Instead of sitting in a chair, I picture him taking the call from a hammock of white fabric-relaxed, suspended. 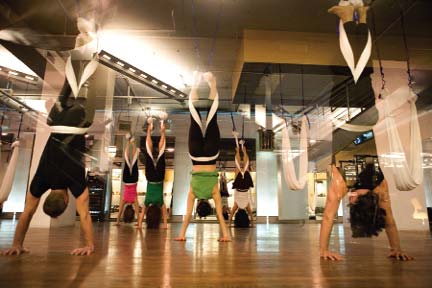 It’s not just my crazy imagination. Christopher Harrison is, after all, the inventor of a new fitness craze called antigravity yoga. The technique combines movement vocabularies from dance, gymnastics, Pilates and yoga and then suspends them-and the practitioner’s body-from a cloth sheet hung from the ceiling. It is a concept and a technique first tried by Harrison while working in New York. It has since traveled to Chicago, Las Vegas and Hollywood. Now antigravity yoga is breaking into the international scene. But the roots of the practice are here in Utah.

Harrison was born and raised in Brigham City and attended Box Elder high school. He came to college with a background in sports-in 1978 he had taken forth place in tumbling at the World Games-and graduated from the University of Utah’s dance department in 1984. He was cast for a part in the movie “Foot Loose.” Actor Kevin Bacon told him that to be successful at what he was interested in pursuing he had to move to New York and stay. So he did.

In 1990, Harrison founded the aerial performance team AntiGravity. Taking the concept of aerial dance-suspending dancers from cloth banners (see “Shall We Dance?” in this issue of CATALYST)-from the circus performance scene, Harrison helped to adapt the cloth tool to fit the needs and training of his performers. Experimenting with fabric looped into a hammock, his group of athletes, dancers and gymnasts found they could use their acrobatic skills with this new tool to perform suspended (up to 30 feet) above the ground. In the process, Harrison discovered that the hammock also had some therapeutic benefits.

“I was flying all over the country with work and before getting on flights I would hang from the hammock. After a while I stopped going to my chiropractor because my back aches and pains went away,” says Harrison. When he realized these additional benefits of the antigravity work he decided to create the fitness method antigravity yoga. Using the hammock for support, antigravity yoga helps people to hold challenging postures longer. It allows for greater stretching with less strain and relieves compression on joints and spinal vertebrae.

“People look at the movement and think it will be difficult, but it is actually very accessible,” says Harrison. “I didn’t create it for yogis, I created it for my mom.”

Now, says Harrison, life is coming full circle as he prepares to bring antigravity to Utah, both as a performance troupe and as a fitness form.

Harrison is bringing antigravity yoga to the state through Imagina­tion Place, a center for music and movement in South Salt Lake. Classes will be offered for adults at “high, regular and restorative” levels (restorative being for people with physical challenges or injuries). The Imagination Place primarily encourage children’s engagement in the visual and performing arts. Harrison looks at the center’s focus on children as a chance to test and develop antigravity yoga classes for a younger audience. Classes start at the Imagination Place this month. www.imaginationplace.com