Until the 1970s, the chakras were little discussed, mostly mysterious wheels of energy ascribed to ancient yogic traditions. Since first learning about them in the 1970s, Anodea Judith has made teaching them her life’s work. Her book Wheels of Life: A User’s Guide To The Chakra System (1987, revised 1999: Llewellyn Worldwide) sold more than 250,000 copies. She calls them portals between the physical and spiritual planes that humans can harness to manifest the lives we want to live.

Judith is also the author of eight other books including, most recently, Creating on Purpose: The Spirit­ual Technology of Manifesting Through the Chakras, with Lion Goodman (2012: Sounds True).

Judith will be in town this month, signing books at Golden Braid Books November 14, speaking at The Shop in Park City that evening, and teaching a workshop at Louland Falls (formerly the Rose Sachs Garden) November 15-16.

We recently spoke with her via Skype.

Tell us a bit about your background.

I mostly grew up in Connecticut. I was always fascinated with psychology; when I was in high school in the ’60s I was taking psychology classes at night at the junior college. Then I went to Clark College. But I was disillusioned with what they were teaching in psychology there, so I headed west to California. I’ve had a long, checkered journey studying consciousness and yoga, going back to school, making my living as an artist—lots of things.

You’ve said you discovered the chakras through reading Ram Dass’ The Only Dance There Is (1974, Doubleday Anchor) about the chakras and having this “zing” of awakening. So what happened there?

That was when I first discovered the word. I was already reading a bunch of books on consciousness. I’d started Transcendental Meditation in 1972—that preceded the discovery of yoga in 1975—and when I saw the word chakra, it was just like a bolt of energy went through me. I knew on some level I had found my life’s work. It was a precognition. And it did become my life’s work. I think sometimes when something is going to be very powerful to us in the future, we recognize it. People have that sense when they meet their life partner. They have an immediate sense of recognition, even though they’ve never met that person before, and it turns out it’s recognition from the future.

I was reading about chakras, and was having a sense of familiarity with it already. The idea as it was being put out then was that the lower chakras were nasty and bad, and you had to close them down to get to the upper chakras. And right from the get go, there was something in me that said that’s not right. Why do we have seven chakras if we’re not supposed to use all seven? That’s kind of a silly system.

So I began doing research and realized that’s just a slant, the slant that comes from patriarchal religions in general that say the body and the Earth are bad, and only the spirit is real. It’s not really what the old texts say at all. They are from the tantric tradition from yoga philosophy, which is all about the weaving of dualities, so it’s mind and body, heaven and earth, spirit and matter, masculine and feminine—it’s all about weaving those together that is the chakra system. 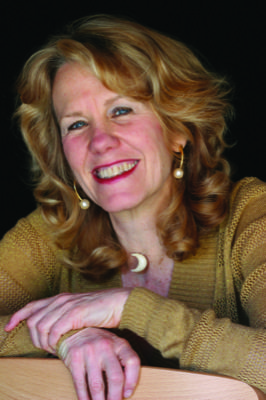 How did you go from having something that resonated with you to really making that the focus of your work and turning a vision into books and art and all the things you’re doing?

It happened slowly. It just sort of became what I was doing, the lens I was looking through. I had this burning desire to write my first book, Wheels of Life. It took me quite a long time because I was learning to write. Once the book came out, that just opened doors.

In terms of how do I take an idea into manifestation, that’s what my more recent book, Creating on Purpose, is about. It’s about manifesting through the chakras. That’s the top-down journey, where you begin in your highest consciousness, your will, your energy, your passion, and bring it down to manifested form. So I actually followed that path and manifested quite a bit in my life.

That’s interesting. Most approaches focus on starting at the root chakra, and going up in order, supposedly because you can’t balance a chakra if the ones below haven’t been balanced or are not awakened.

I think there are arguments for both ways. Balancing chakras from the bottom up is the liberating current; from the top down is the manifesting current. You go from fixed form to freer and freer forms on the way up— earth, water, fire, air, sound, light and consciousness. Each one is freer and more abstract as you go up, so that is liberating. In the ancient texts they called it mukti, which means liberation or freedom.The downward current in the ancient texts they call bukti, which actually means enjoyment. But I take it all the way down and call it manifestation as we go from idea to then an image to then a word, to then a relationship, an action. So it gets denser: consciousness to light to sound to air to water, fire and earth. The old texts even described the chakras as condensing chambers—for condensing energy into the different levels of manifestation. It all depends on what you’re doing: Are you liberating or do you want to manifest? And believe me, you don’t have to have perfectly balanced chakras in order to manifest.

You have been writing and teaching about the chakras for decades, now. How has your teaching changed over the years?

Good question. The yoga has always been a part of my teaching. The manifestation has been part of it only for the last 14 or 15 years. I teach trainings for therapists as well. If anything has changed, it’s more emphasis on the core, coming into your vertical channel of energy between crown and base. The core is really where it’s at.

What do you mean by the core?

I don’t mean the Pilates core. Sometimes they call the pranic tube, the shushumna, the channel between the crown chakra and base. It’s a vertical channel down the center of you. So if you put your roots down and stretch your crown up you’re actually lengthening that internal channel. I have people put a string down the center of their yoga mat so they can align their core with the strings at the center of the mat, so we get more conscious of breathing out from our core, breathing into our core, running energy up and down the core. And then the chakras are like stations and chambers along the core.

Besides the seven main chakras, Aren’t there other chakras as well?

The old texts talk about sub chakras that are part of the other chakras. I talk about chakras in the hands and feet. I don’t talk about ones above the head or below the body; how do you prove they’re there, how do you access them if they’re not in your body? I stick basically to the seven main ones, but I do have a simple exercise to work with the hand chakras. It shows people what energy feels like.

In your exploration of the chakras as you were learning about them, what did you do to get to understand them better?

I would say I spent significant parts of my life dwelling on each one. In the first chakra, which is element earth, I gave up everything I had and went and lived on the land, did that off-the-grid community. In the second chakra, I’d say that was when I was pregnant with my son. Third chakra, I was president of a large international organization, a spiritual organization. Fourth chakra was probably my family and community phase: I married into three additional children. Fifth chakra has been my speaking out in the world, my books. Sixth chakra, my visionary part, and of course my seventh chakras has been there all along informing it.

It’s such a complicated subject. What can you teach in a weekend?

I can give people an understanding of the chakra system, I can give them an experience of the vital energy in their own body, so they know where it is, something about what their issues are. I wouldn’t say it solves all their issues, but it gives them a map for understanding their issues.

I talk about the childhood development in each chakra, and the wounds, and that way people have a kind of diagnosis of their own energy system. That diagnosis is not pathological. It doesn’t say there’s something wrong with you, it just says something is out of balance, and this is the direction you need to go to bring balance.

How does your approach differ from what you’ve called “airy fairy” practices?

Approaches where you think about something and expect it to fall in your lap are airy fairy, and I think that’s upper chakra-oriented. I’ll start with that in the manifestation process; you have to think of something before you create it, and you have to imagine it. But those are just a couple of steps, and then you have to do the work to bring it into being. Anyone can manifest. There’s a lot of action and planning and tasks, but what I have done is map it out through the chakras so it becomes very systematic, very practical, and that, I think, is less of the airy fairy and a bonafide map for manifestation.

Can you give an example of a practice you’d use in the manifestation process?

A lot of people have negative voices in their head when they go to do something. The voice that sits there and says “you’re a terrible writer,” “nobody is going to read this,” “you don’t know what you’re doing,” “you’re too old,” or “you’re too fat,” or “nobody’s going to want you.” “There are no good men out there,” voices that are doubtful or derogatory. A lot of people get stuck by that. So we have practice for clearing out those voices, letting them have their say, and separating from them, so you’ll understand they are just voices, not truth, and balancing them with positive voices.

Where do those voices come from?

They’re all internalized from outside. They are protective voices in some way. They might be internalized from a critical parent. They might be that you’re scared, so if you don’t try, you’re safe. But you’re not safe, because then you are living in passive whatever the world gave you instead of getting what you want. So it’s an illusion of safety.

Do you feel you have manifested your vision? What are you working on now?

I’ve manifested my personal vision in terms of career, home, all the basic things. My bigger manifestation dream is that humans wake up to the evolutionary imperative that is upon us now, and realize our job is to create heaven on Earth, wake up to that as potential or change right now. Getting that idea out there is a bigger project.

So we don’t need to die to go to heaven?

My friend Neal Rogin said it so well: “We don’t need to raise hell, we just need to lower heaven.” And I think that’s the truth. Heaven can be right here, right now. We can create it in our everyday life in our relationships, in our food, in our children, in our environment, and that’s what we are here to do.