Caprophagia: Cut the crap for canines.

I love poo eaters. My pets are guinea pigs who are coprophagic, which means they eat dung. Guinea pigs, like rabbits, eat high-fiber grasses that are difficult to digest so they must re-ingest them to derive all the vital nutrients.

I find it endearing. However, many dog owner

s are not so endeared with the coprophagic behavior of their canines. They want to know why it happens, if it’s harmful to their pet, and how to stop it.

Why they do it

My initial guess was that, like my Guinea pigs, they do it because it’s good for them somehow. In researching the subject, I found that it is one possible scenario.

“It’s called pica, which is a nutritional or mineral imbalance that causes unusual cravings,” says Rick Whitty, DVM. “It is more common in younger dogs who require higher nutrition.”

Pica got its name from the Latin word for magpie, a bird with indiscriminate feeding habits. Dogs suffering from pica may eat dirt, clay or pebbles in addition to feces. Incidentally, pica also affects humans, particularly pregnant women, though their cravings (thankfully) are usually quite different.

Others think coprophagia is simply a natural instinct since mother dogs often eat their pups’ stools, apparently to keep the den clean and hide their presence from predators.

I spoke to another vet, Dr. Laura McLain, who agrees that it can be a natural instinct. “When our puppy was six months old, his favorite treat in the winter was frozen feces from the yard,” says McLain. “We gently discouraged him from eating the poopcicles, and within about six months, he grew out of it. It hasn’t been a problem since, and he is now 12 years old.”

Others think it’s due to feeding habits. Dogs naturally want to have multiple meals throughout the day, so if they are getting only one meal per day, they may use coprophagia to satisfy their appetite. 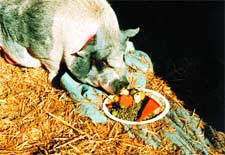 Still others suggest it’s a vice of bored dogs, usually when isolated in the backyard and provided with few toys and little owner interaction.

Most veterinarians agree that poop-eating is not usually harmful for the animal, especially if it seems a simple instinctive act. However, Dr. McLain stresses that if it appears as a new habit in an adult dog or if there are any medical concerns (such as diarrhea), it could be a sign of assorted health problems, such as pancreatitis, intestinal infection or food allergies creating mal-absorption of nutrients.

Dr. Whitty concurs and adds that an additional concern is that the dog can ingest parasites or bacteria from another animal’s stool. A pet with bacteria or parasites himself who eats his own feces will delay healing.

Hofmeister et al. state that if properly dewormed, a dog eating dog feces  is usually not at risk for internal parasites. However, eating feces of other animals, including housecats and wildlife creates more cause for concern.