Animals Animals: A Cry for Orangutans

Will palm oil render them extinct in 10 short years? 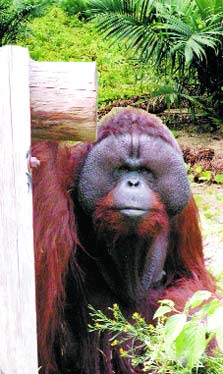 As a Catalyst reader, you likely have concern for the environment and look for natural foods and products from earth-conscious sources. Unfortunately, sometimes when we think we’re doing good things, we can still be harmful. Such is the case with palm oil—something I thought was a good alternative to trans-fats. I was surprised to learn that Indonesian palm oil manufacturers have a major impact on the survival of orangutans in the wild.

According to the Center for Science in the Public Interest (CSPI), the increased demand for palm oil is fueling destruction of the rainforest habitat of Sumatran and Bornean orangutans, pushing those and other endangered species even closer to extinction. Currently fewer than 60,000 orangutans are left in Indonesia, and with the rise of the palm oil industry, their numbers are decreasing at a rate of 5,000 per year. Estimates show that if something isn’t done soon to stop the spread of oil palm plantations into the forests of Indonesia, orangutans could be extinct within the next 10 years.

After soybean oil, palm oil is the second most widely produced edible oil. Its use is increasing dramatically due to companies scrambling to find alternatives to partially hydrogenated oils. Palm oil can now be found in cookies, crackers, shampoo, skin care products and pet food; it is popular in many products sold in natural food markets. In addition, palm oil is being considered as a possible fuel alternative. In fact, a major Australian bio-fuel manufacturer already uses Indonesian palm oil. If others follow suit, it could spell disaster for the orangutans.

Once more widely distributed, orangutans now live only in the lowland tropical forests of the Southeast Asian islands of Borneo and Sumatra. In the past 20 years, 80% of their habitat has been destroyed, and only about 2% of what remains is legally protected. The Sumatran species is listed as critically endangered and the Bornean species is categorized as endangered on the World Conservation Union’s red list of threatened animals.

Orangutans are gentle, curious, extraordinary creatures. They are important for the biodiversity of the rainforest because they disperse seed on the forest ground by eating and spitting fruits. Female orangutans have a baby only once every six to eight years, so each one is especially precious. As tree-dwelling creatures, they depend on the lush rainforest for survival, and that rainforest is being destroyed. Many blame the logging industry, but logging is secondary to what is being done to produce palm oil.

A new oil palm plantation starts with the clearing of rainforest trees where the orangutans live. Often the trees are clear-cut and then the residual peat is burned off. But sometimes the cutting is dispensed with completely because burning is quicker and more thorough.

The burning method can destroy three football fields worth of rainforest every minute. Not only does the destruction of trees impact the orangutans, but the resulting smoke from the fires leaves many forest dwellers (and humans in close proximity) with serious respiratory problems.

Farmers desire palm tree plantations because of the range of uses for the oil that comes from the palm tree nut. The trees are easy to maintain and produce nuts in just months. The nuts are tasty too, and orangutans searching for alternative food sources become pests to the plantation owners, who resort to killing off the great apes to keep them at bay.

So what can we do about the palm oil problem? Helen Buckland with the Sumatran Orangutan Society (SOS) says, “We don’t want people to boycott products, because that will only push the problem to other areas. If people want to help, we encourage them to write polite letters to organizations using palm oil, asking them to buy from only non-destructive plantations. This is an important awareness step because many companies don’t even know where their palm oil originates.”

In November 2005, the Roundtable on Sustainable Palm Oil (RSPO) produced a list of criteria, approved by a wide range of stakeholders in the palm oil industry, defining what makes a plantation “sustainable.” The criteria specify practical ways for a plantation company to reduce its negative social and environmental impacts, while also increasing efficiency and productivity.

One key criterion states that “primary forest and any area containing one or more High Conservation Values must not be converted to plantation.” This includes forest inhabited by endangered or endemic species, threatened ecosystems, forests providing essential ecosystem services such as watershed protection and erosion control, or land that is traditionally owned and culturally significant to indigenous communities.

“The problem is that this criteria code is voluntary,” says Buckland. “As long as governments continue to allocate plantation concessions within high conservation value forests, the industry at large will continue to pose a threat to habitats and biodiversity.”

A recent international campaign launched by conservation groups in the United Kingdom successfully raised consumer awareness across the globe about the deadly link between oil palms and orangutans. The idea was to put pressure on major retailers and consumer goods manufacturers to join the Roundtable on Sustainable Palm Oil (RSPO), in order to create a market for sustainable palm oil. A number of companies joined the initiative, pledging to work toward sustainability in the industry.

As Americans, we have a powerful tool to effect change—our pocketbooks. Manufacturers need us. If product manufacturers hear from enough people asking for earth and animal friendly products, we can make a difference, as proven with the U.K initiative. As a result of  letter-writing and postcard campaigns, almost the entire U.K. retail sector has signed up with the RSPO, including two major supermarket chains. Wouldn’t it be nice to get this kind of result in the U.S.?

Here in the states, many companies  such as Keebler, Oreo, Mrs. Fields, and Pepperidge Farm use palm oil. It’s increasingly found in crackers, pastries, cereals and microwave popcorn. Another palm oil importer is Wal-Mart, using the product for some of its house-brand cookies. A campaign has already started encouraging people to write letters to Wal-Mart president and CEO Mr. H. Lee Scott, Jr., urging him to take a leadership position in the food industry by implementing a corporate policy on palm oil that would involve only using palm oil from sustainable sources and insisting the other brands they carry do the same. The campaign also suggests persuading Wal-Mart to join the RSPO, to encourage the entire palm oil industry to adopt ecologically sound practices.

In Salt Lake City, organizations have already started initiatives to effect change in the importing of palm oil. Wasatch Animal Rescue employees have been posting flyers to raise awareness of the issue and have embarked on a major letter-writing campaign. In addition to writing letters to manufacturers using palm oil, they are writing to other manufacturers explaining the issues involved with palm oil production and urging them, if they do decide to turn to palm oil, to seek sustainable sources.

Hogle Zoo has also become involved. The primate caretakers at the zoo have initiated a program to educate visitors at the great ape exhibits. Bobbi Gordon, one of the zoo’s primate caretakers, says visitors are always interested in learning more, “We use our orangutans as a tangible link for visitors, while explaining how each person can make a difference in their survival. I also talk to friends and family… or anyone who will listen. It’s important to get the word out. And as an ape caretaker, I’m in a unique position to do it.”