Made of music, mothering, and magic.

Amour Spreads technically began in 2010 on John and Casee Francis’ second wedding anniversary hike in Idaho. They had asked for a sign from the universe on what’s next in their careers, and found a thimbleberry bush that yielded enough fruit for the couple’s impromptu jam-making hobby to blossom into something far bigger than they could have imagined—Amour Spreads. (See the 2012 CATALYST article.) Last year the Francises took it to the next level by opening Amour Café.

I step into Amour Café, and the delicious smells and French-inspired decor sweetens my day like a sable cookie (a French shortbread cookie) they serve with every order. I instantly see why my mother insists on coming here: “You feel like you’re somewhere else,” she tells me. This is no accident. There’s a combination of mothering, music and magic at play here.

John is the music: a champion fiddle player who channels his skill with music into cooking the jam that makes this café unique. “Jam is like music. You can play a song a dozen times, or you can make a dozen batches of jam, yet each one will be a little bit different and have its own personality,” says John as he expertly cooks down a batch of merrily splattering blackberries. “I love the music in it.” 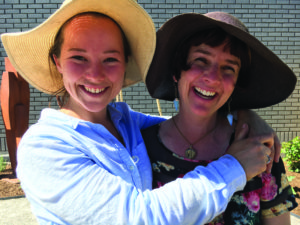 Casee is the mother: from many gardens through her side business, Lady of the Rake Gardening, to her daughter, Jahnavi, and to this budding community gathering space. A nurturer by nature and trade (Casee was formerly a midwife), she remembers the tender times immediately after November’s election when many guests came to Amour for community support, “There were a lot of tears.” Casee recalls some customers saying, “I don’t know how I would have made it if I couldn’t come here to get a hug.”

Together, John and Casee conjure magic both in their jam, and in the space they’ve cultivated. “The real intention was to create a hub of magic where people could come and have whatever conversation they needed to have,” says Casee, whose inspirations for the café include Alice Waters, the TV show Cheers, and the concept of third space. Third spaces, or third places, are locations in people’s lives other than home (first space) and work (second space). The cozy corner southwest of Liberty Park has hosted celebrations of life for both the living and those who’ve passed, as well as a monthly postcard party with America Indivisible.

An immense amount of renovations has transformed the Amour Café building into what it is today. The building was originally Cozza Market, a local butchery and grocery store from the early 1900’s to the 1990’s. Before the Francis’ took it over, Eiffel Tower Catering occupied the building for many years, renting their commercial kitchen out to the Francis’ for the first couple of years of Amour Spreads since 2011. By summer of 2016, Amour Café opened their doors to café patrons. The commercial kitchen in back still incubates smaller projects such as farmers market sweethearts Salsa Del Diablo and Raclette Machine.

They offer sweet and savory pastries, gelato (made from herbs from the on-site garden such as Lemon Verbena & Anise Hyssop), soda, coffee drinks (including a wonderful rose latte) daily. The menu typically includes a seasonal salad, a soup of the day and a healthy, well-curated menu.

The cafe sources from the most local and sustainable providers as possible; some include Clifford Family Farms and Caputo’s. Starting in September, their baked goods will come from Bubble & Brown and Bread Riot as Amber Billingsley, the pastry chef who helped them open their café, ventures out to her own endeavors this fall.

But, while the inside is full of beauty, good smells and good eats, the front patio and side garden threaten to upstage the inside. Lady of the Rake shows her scrappy ways, interweaving hibiscus with grapes, apples, and pumpkins. “The truth is, [the fruit grown in the front and side gardens] are essentially an offering to the community,” says Casee. Hungry souls may take what they like, as sort of a way for Amour Café to give back. In more ways than one: “I have a deep belief that gardens create sacred space for people. Joy, relief, retreat,” says Casee.

In the side garden, about a foot away from each other, stand two large copper sculptures by local artist Gary Andersen, called ‘The Couple.’ One is square and boxy, the other complements it with curves. Are they dancing? Are they working? I think they are inviting us all to slow down, and witness the magic that intentions can create.

There’s something to be said about an operation where the same set of hands that put the fresh berries in the pot also tightened the lid on the jar of jam. Like a musician who is loyal to his instruments, most of John’s workdays starts with four French copper pots and a few simple ingredients. First, are the freshest in-season berries; “I won’t put them in the jam if I won’t eat them fresh,” says John. Next is the fresh lemon juice and sugar. John makes about 30,000 jars of jam and marmalade per year. And while that sounds like a lot, it’s barely enough to keep stocked the few local establishments including Publik Kitchen, Liberty Heights Fresh, Caputo’s and other specialty grocery stores they supply.

“It’s amazing how much volume is in food production,” muses John, who stays busy enough all year, processing all their fruit through those four copper pots. Whole Foods has been nudging Amour Spreads since their jam first appeared on Pago’s cheese plate in 2011, before they were serious about their jam-making endeavor. Yet their current production process wouldn’t meet the volume needed to supply Whole Foods. “We really have recognized for us to stay artisan, and stay true to our beliefs and desires, we’re going to stay small,” says Casee.

This article was originally published on September 1, 2017.