Glendale’s urban homesteader Kyle LaMalfa connects with the land—and hopes to knit together a community. 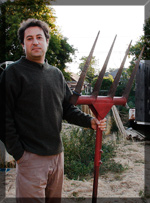 An hour before sunset, Kyle LaMalfa walks me through rows of tall, leafy tomato vines. He stoops and plucks an oddly shaped red bulb and offers it to me. It’s a variety of heirloom tomato, its sides deeply grooved and wildly colored. We move on to rows of squash, sunflowers, trellises of aromatic hops. At the far end of the property are beehives. A greenhouse stands just outside the back door. 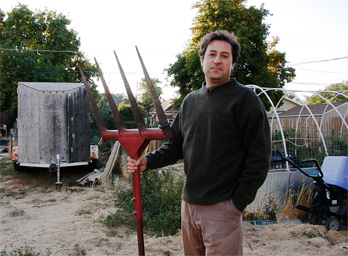 An hour before sunset, Kyle LaMalfa walks me through rows of tall, leafy tomato vines. He stoops and plucks an oddly shaped red bulb and offers it to me. It’s a variety of heirloom tomato, its sides deeply grooved and wildly colored. We move on to rows of squash, sunflowers, trellises of aromatic hops. At the far end of the property are beehives. A greenhouse stands just outside the back door.

Kyle owns this lot and the one next to it; half an acre in all. This is an urban farm, located around 200 South and 800 West, just blocks from downtown in the Glendale neighborhood—not some huge plot of land on the outskirts of the valley. Here, with the help of his friends, he produces an astonishing amount of food, a fair amount of which he sells at the People’s Market, an organization dedicated to helping the denizens of Salt Lake sell their excess garden produce. It’s an organization that Kyle founded in 2006, a project he’s been dedicated to ever since. 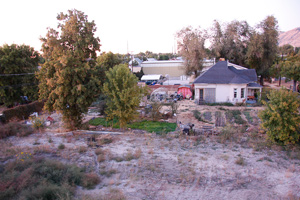 He wasn’t always an urban homesteader, connected to and trying to live off his land. Five years earlier, he was working as a network engineer for a Park City ski resort and living in an apartment in Glendale. He considered his conditions temporary—his sights were set on bigger and better. “I was a consumer, and my goal in life was to figure out how I was going to climb the corporate ladder, buy the best stuff, go to the farthest places, experience the best things,” he says.

But life changed for Kyle in 2004. He had signed up for a free community leadership class offered by the University of Utah-affiliated Westside Leadership Institute, intending to use the acquired skills to attain a promotion at work. His project for the class was to organize a community yard sale in his Glendale neighborhood. The project was a success, and the exper­­ience turned Kyle’s world upside down.

“It changed my whole worldview,” he says, trying to explain how this could happen. “The class gave me a different perspective on the world, one where my goal was to be a producer, and not necessarily a consumer, and to take pride more in the things I produce than in the brands or products I consume.”

Kyle took this revelation to heart. He decided to go back to school, and the next year he got the ball rolling on taking his yard sale project to the next level. “I took a year to think it through and put together some partners. I talked to legislators, to community leaders, big gardeners, anybody I could get my hands on or take to coffee,” Kyle says, laughing. What came of this talking and planning eventually became the People’s Market. In 2006, Kyle bought insurance, had a volunteer paint some signs and took out ads in a couple of newsletters.

Like a lot of community initiatives, this one took a while to get moving: The first market had one backyard farmer selling produce on a card table. Things picked up, though, and after the planned 10 weeks of markets, participants asked for four more. Now in its fourth year, Kyle says the market has developed a base of loyal sellers and customers who show up every weekend, rain or shine.

Kyle, too, has developed some loyalty. After years of trying to “escape” Salt Lake, he says now he’s here to stay. More than just Salt Lake, he’s committed to the west side. “I’ve developed an identity, and part of that identity is wrapped up in this place—its unique culture, its people, its networks. They’re part of me.” For Kyle, the west side is about community and diversity.

Salt Lake is more than 80% white, whereas in Glendale and Rose Park Caucasians make up less than a fifth of the population—Latinos, Pacific Islanders and Africans dominate. And families have deep roots on the west side. “There’s a lot of pride and solidarity about living here,” he says. “There are some families who have been here for four generations. They’re intertwined in ways that, as a person who has only been here 10 years, I will never, nor will my children ever, understand.”

A double-edged sword, the roots of a diverse community like this cause a cliquishness that Kyle would like to see overcome. He says there’s little interaction or communication between the diverse communities. He intends to keep growing his roots into the westside soil, toiling to make where he lives a better, more integrated place. Committed to being an agent for change, Kyle feels his work on his land and his work with the People’s Market can help knit the west side together.

“I think there’s room for some sort of ‘community bulletin board,’ symbolically—a place of communication. I hope the People’s Market can be that,” Kyle says.

Kyle also has plans to make his home even more community oriented. Next on the agenda: the party barn. He plans to build a barn on one side of his property, not to store tools and equipment or to house livestock, but to provide a space for his friends and Market participants to have parties and events—a sort of westside gathering place.

For now though, harvesting the few remaining squash and getting the land ready for winter are on top of the to-do list.