A local store owner has her fingers in a lot of pies…gluten-free pies! Diane Bell fights for the health of celiac sufferers.

Every local business adds a little something to a community, but every now and then a company comes along and folks find themselves wondering how they ever lived without it. Against the Grain, a small grocery store in Taylorsville, is just such a place-offering something few people fully appreciate: normalcy.

Every local business adds a little something to a community, but every now and then a company comes along and folks find themselves wondering how they ever lived without it. Against the Grain, a small grocery store in Taylorsville, is just such a place-offering something few people fully appreciate: normalcy. For millions of people around the world, something as simple as eating lunch can make them violently ill. Against the Grain owner Diane Bell and her daughter, Jenny, share that unlucky distinction.

Jenny spent the first seven years of her life exhausted and malnourished. In 2004, she was diagnosed with celiac disease, a condition in which the ingestion of gluten (a protein found in many grains) triggers an autoimmune reaction in the body. This reaction is the result of the body mistakenly attacking healthy tissue, such as the walls of the intestines. Symptoms can take many forms, including indigestion, rashes, anxiety, fatigue, confusion and even “failure to thrive,” which means slowed or stunted physical growth.

Even though Jenny’s diagnosis was the means to recovery, the difficulty of avoiding gluten and still getting enough to eat made the recovery a slow and frustrating one. “We cried for about six months and couldn’t find food for her anywhere,” says Diane Bell. “We were shopping at four to six stores a week. We knew there were other families who were suffering as much as we were with not being able to find food . . . so we decided to open a store.”

Some may doubt the need for such a store, but Against the Grain has been a success, and a godsend for hundreds of people in the community, including Diane herself, who was diagnosed with celiac disease a couple of years after her daughter. Not surprising, since it’s a genetic disorder and more common than people think. Accordingto a large, multi-center study conducted in the U.S. in 2003, one in every 130 people have celiac disease. Many more suffer from either gluten intolerance or wheat allergies, which basically means they still become sick when they eat wheat or gluten, but it doesn’t trigger an autoimmune reaction in the body. Most people suffering from these conditions don’t even know they have them, and are often misdiagnosed because the symptoms are similar to many other conditions, such as irritable bowel syndrome, chronic fatigue or arthritus. 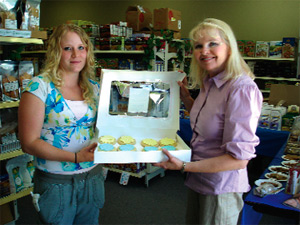 Gluten-free products are becoming more accessible, but it’s still difficult to find options that taste good and aren’t loaded with sugar, which is important since many people with celiac disease also suffer from diabetes and hypoglycemia. The public’s general lack of understanding about gluten and wheat issues makes it very tricky for a celiac sufferer to lead a normal life.

Diane claims her store is sometimes an emotional place. “When people come in for the first time, there are a lot of tears because seeing this much gluten-free stuff is almost a miracle.

Diane has been working as a celiac advocate for years. “We make sure that when moms come in whose kids have been diagnosed, they know the school has to provide lunches for them,” Diane says. It’s a federal mandate.

Sometimes the school districts really struggle with that. According to Diane, schools often try to take the easy way out and just give gluten-intolerant kids a baked potato instead of something comparable to the pizza the other kids are eating. But the law requires that they provide similar food, and this is where Diane’s advocacy comes into play.

She has spoken at school district conferences and instructed school lunch managers on how to deal with gluten-intolerant kids. Diane also helps hospitals, convalescence centers and other treatment centers to properly care for their gluten-intolerant patients, and she is an active supporter of Gluten Intolerance Groups of Utah (www.gfutah.org), which holds monthly meetings at St. Marks Hospital. She sometimes brings samples from her store to share with fellow members. She helps people understand there are a lot of products available for them to enjoy.

In addition to everyday gluten-free products such as bread, crackers and hot dog buns, Against the Grain also offers holiday desserts, sugar cookies and customized birthday and wedding cakes, baked by a local guaranteed gluten-free wholesaler. Last Thanksgiving, 600 apple, cherry, pumpkin, pecan, key lime and other pies went through Against the Grain’s doors.

For those food-sensitive people interested in emergency preparedness, Against the Grain offers 72-hour kits in three assortments: gluten-free, dairy-free, and gluten-dairy-soy-free. “After Katrina, there were a lot of people stuck in New Orleans who were gluten intolerant and didn’t have anything to eat. When the government comes in, they bring MREs (Meals Ready to Eat) and things that are full of wheat. So we just decided that there needed to be 72-hour kits for somebody who has special needs,” Diane says.

The Against the Grain staff seems to have thought of everything a gluten-intolerant person could need, which is good, because new diagnosed celiac sufferers are often too overwhelmed to think of everything themselves. Even veterans of the disease find it hard to avoid gluten because it’s found in just about every processed food on the market, not to mention many shampoos, lotions, and even some toothpaste. It can be a big blow to find out you can’t eat all your favorite foods or even use your favorite hair products, but Diane hopes to help her customers feel more optimistic about their condition.”A lot of people are frightened about being diagnosed and don’t want to know, but for me it has improved my quality of life. It’s a journey we’re all on. And you have to think positively about it. You have to look at it more with what I can have and what I can eat, rather than what I cannot. Because that bagel you used to eat? I’ve got gluten-free bagels. Or that piece of cake? Hey, I’ve got gluten-free cake. You know, if I want to eat those things, I can!” laughs Diane.

Miriam Card is a senior in the University of Utah’s Environmental Studies program and an intern at CATALYST magazine.