High West Distillery brings the Wild West back to Utah.
by Scott Evans 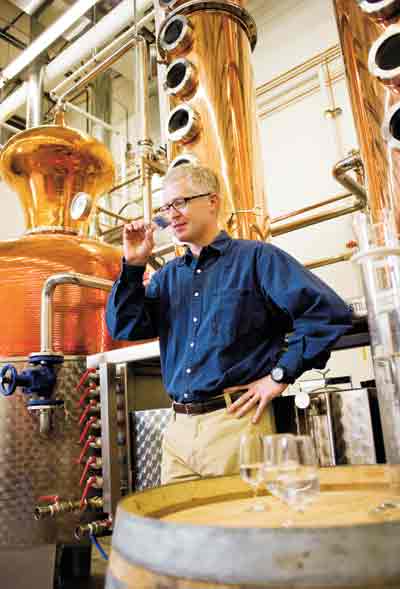 Each spring the desert beckons me. About this time each year, I grasp for books, maps and literature that compels me to pack my gear and get on the road. My current reading choices, “All the Pretty Horses” by Cormac McCarthy and “Angle of Repose” by Wallace Stegner, have only increased my salivation.

On nearly every adventure, an excellent bottle of booze accompanies me on my journey. After a recent tasting and tour of Utah’s first distillery since Prohibition, High West Distillery, I believe I’ve found a most fitting travel companion. Their Rendezvous Rye Whiskey features more than a complex glass of whiskey; it packs a punch of history as well. High West Distillery named their “initial public offering” whiskey after the annual rendezvous of trappers and settlers that took place in Cache Valley, Utah where, in 1826, the West’s first recorded whiskey-fest took place as the mountain men gathered to exchange pelts for supplies.

With a background in biochemistry, High West Distillery owner David Perkins has long appreciated whiskey and bourbon. He began distilling in 2005 after an inspirational trip to the Makers Mark distillery in Kentucky. Three years of hard work and some mentoring from a master distiller has resulted in Rendezvous rye whiskey, which can be found at Utah state liquor stores ($40/750 ml). The handcrafted glass bottles reflect the crafted nature of what’s inside, Perkins says. He doesn’t “chill filter” the final product (a standard cosmetic step) making for a slight cloudiness and, Perkins says, enhanced flavor.

He keeps a mailing address in Park City, but his beautiful, manually operated copper pot still and small staff reside in a westside Salt Lake City warehouse while awaiting their official digs in Park City. High West’s ambitious plans include revamping the 100-year-old livery stable in old town and to be distilling on-site by 2009. In addition to rye whiskey, High West has released Vodka 7000 (referring to Park City’s elevation), distilled primarily from oats. Future offerings will likely include local fruit-infused vodkas and possibly some eau de vies (spirits distilled from fruit brandy) as well.

Before it gets to the bottle, Rendezvous Rye is made from crushed grain (rye in this case) mixed with water in a “mash tank” where fermentation begins. Then the liquid, or wort, is transferred to fermenters, and the mashed grain is left behind Next, yeast is added to the mash causing a bubbling fermentation. Up to this point, the process mirrors beer production; it takes about a day to get the wort to the fermenters and two to three days for full fermentation to take place. In fact, the whiskey-maker’s name for fully fermented wort is beer.

The departure from beer-making begins when the beer is transferred to the still, which heats the beer to 175 degrees, causing the alcohol to evaporate. The evaporated liquid is cooled, captured and transferred to barrels to age. Every whiskey producer has its own trade secrets about length of time in the barrel and what type of barrel is used. Rendezvous Rye is made from two 100% rye whiskeys; one aged for six years and the other for 16 years.

Whiskey (also spelled whisky) is a general term that refers to any alcoholic beverage distilled from fermented grain mash (barley, rye, wheat or corn) and aged in wood. The variations in spelling generally correspond with the country of origin. The United States and Ireland refer to “whiskey” and “whiskeys” while Japan, Scotland, Wales and Canada all utilize “whisky,” with “whiskies” for the plural form.

Understanding the differences between bourbon, scotch, rye and Canadian— all types of whiskey—can make the inexperienced whiskey drinkers’ eyes glass over. To briefly clear the smoke: Bourbon is an American whiskey made primarily from corn which is distilled in Bourbon County, Kentucky; it’s aged in new oak for at least two years. Scotch whiskey is made mostly from barley, distilled in Scotland and aged in used oak barrels for a minimum of three years. Rye whiskey is American and has to be made from at least 51% rye mash. Canadian whiskey is made from a blend of grains and is aged in wood for a minimum of three years.

For a state with such strong feelings about controlling the sale of alcohol, Utah has a rich history of drinking and distilling whiskey. Historical records show that some early settlers were makers and sellers of whiskey. As early as 1859, a portion of Main Street in Salt Lake City was known “Whiskey Street.” The drink of choice on Whiskey Street and its environs was a local whiskey named “Valley Tan.”

With historical relevance, High West Distillery tempts our state with world-class whiskey. A true artisan whiskey, Rendezvous Rye surpasses the historic Valley Tan with finesse and style. It was recently awarded the Double Gold Medal at the San Francisco World Spirits Competition, the Grammys of the spirits worlds. Rendezvous Rye whiskey is a godsend for Utah and anyone who appreciates a good stiff drink.

Scott Evans is a manager and liquor buyer at Squatters.