A Warning to Nude Soakers 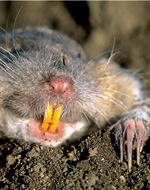 Enjoying nighttime au naturale can land you a “lewdness” charge in Utah County. 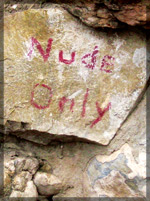 My weekend began as innocently as it should have ended: Eight young friends, six of whom were fire fighters for the US Forest Service celebrating the end of another fire season, spending a weekend camping in Utah. Our destination was Diamond Fork hot springs, just east of Spanish Fork, Utah, toward Price. Diamond Fork is a popular destination for people from all over the state, and even the country. The pools, although usually “family friendly,” are well-known for attracting more than the occasional group of nude bathers.

My weekend began as innocently as it should have ended: Eight young friends, six of whom were fire fighters for the US Forest Service celebrating the end of another fire season, spending a weekend camping in Utah.

Our destination was Diamond Fork hot springs, just east of Spanish Fork, Utah, toward Price. Diamond Fork is a popular destination for people from all over the state, and even the country. The pools, although usually “family friendly,” are well-known for attracting more than the occasional group of nude bathers. Even those unfamiliar with the locale’s reputation for bathing sans suits can get a good hint of its potential on the two-mile hike leading up to the springs. At the trailhead itself the Forest Service has posted a sign: “Although nudity is not prohibited on Forest Service land, discretion is advised.” A mile up the trail, a bridge crosses a fork of the canyon’s main creek. Scratched into the red paint on one railing is a message: “Warning, nude bathers.” At one pool, pranksterish vandals have scrawled on the stones in faint red paint “Nude Only.”

On this particular Saturday evening in October, my seven friends and I arrived at the trailhead well after dusk in order to avoid the usual crowd. We hiked the two miles in, only to find the lower pools still occupied. As the sole veteran Diamond Fork hot spring-goer of the group, I knew how to find more privacy. I led us on to a more hidden series of pools. To our delight we found them unoccupied.

For two hours we enjoyed ourselves in the hot water. We shared cheese and chocolate. We opened more than one bottle of wine. We set little red tea candles around the rim of the pool—just enough light to see each other’s faces as we shared stories and talked.

Then, shortly before midnight, a middle-aged man walked out of the darkness and up to the edge of the pool. He sat down nonchalantly and started making small talk. He did not seem like the soaker type. He wore a red sweatshirt with Utah written across the chest and had a big brown mustache. I remember thinking offhandedly that he looked like a local hunter drawn in by curiosity. Although we were all naked, he did not at all appear alarmed or offended by our presence. So, warmed with wine and companionship, we gave him little attention until he asked us for marijuana.

That’s when I felt something was wrong. We told him we did not have any. Almost immediately, four other similarly dressed men walked in from the trail. They circled the pool.

Suddenly, the light from our candles was drowned by bright flashlights. “This is the Utah County Sheriffs. You are all being charged with misdemeanors for lewdness. We need you to all cooperate. Get out, get dressed and present your identification or we will arrest you.”

I thought for sure it must be a joke. I demanded to see one of the badges up close for verification. Couldn’t this be, after all, just a strange group of men looking for an excuse to embarrass some naked bathers (especially myself and the three other women in the group)? But the badge seemed real enough.

I had to decide how to get out of my watery haven safely and somewhat modestly. I addressed the men in front of—and behind—me. Could you turn around, I asked them. Or turn off your flashlights so I can get out and put a towel around me? I won’t run, I promised. To his credit, whichever of the five he was, one flashlight blinked off. The other four remained pointed at our group.

I realized that I wouldn’t win this battle. So I lifted myself in all my womanly splendor out of the water and into the light and dashed for my nearby clothes. With enough on to cover and keep me warm in the chilly October night, I turned to address our intruders. That is when I noticed that one of my girlfriends still had not exited the pool. She was too embarrassed to leave the water. She only consented to climb out once I brought a towel over to shield her and wrap around her body as she stood up.

The rest of the event occurred with curt politeness from our side, businesslike impartiality from the other. We were well informed that if we did not comply we would be promptly led down the trail and booked.

And so eight citations were written that night by the Utah County Sheriffs. Eight misdemeanors were given for lewdness. Eight court dates have now been set and a group of bathers will soon be defending themselves or pleading guilty in a court of law in Provo.

I can be consoled by one thing: That night at the hot springs was not a complete bust. After taking down all our information, the sheriffs told us to enjoy the rest of our night. As long as we kept our bathing suits on, we could soak for as long as we wished. And so we did. How kind of them. u

Katherine Pioli is a staff writer for CATALYST, except in the summer when she is a forest firefighter in Wyoming.