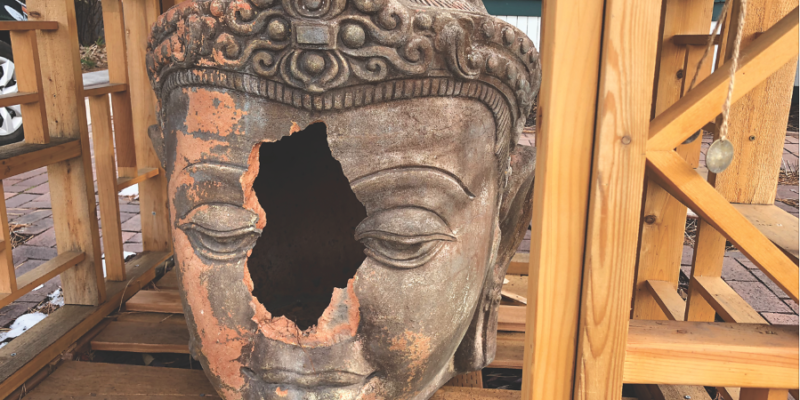 The Buddha on 9th.

Buddhists are a rather serene lot, and that serenity came to the test recently when vandals threw a 25-pound rock through the face of the terra-cotta Buddha statue in the shrine in Benjamin Dieterle’s front garden at 1917 South 900 East.

The intent of the vandals to destroy the shrine seems to have backfired. Reported by KUTV, KTVX, KSL, the Salt Lake Tribune and Univision, public awareness of its existence has been greatly increased, and the resulting commentary has been overwhelmingly sympathetic to Ben and the Buddhist community.

The shrine had been dedicated by Zen master Michael Mugaku Zimmerman just last November, but had already become a landmark for locals.

“Oddly enough, I’ve been strangely untroubled,” Ben said, regarding the attack. “Certainly my meditation practice and study with the Zen Center has fortified me…and the outpouring of kindness and support from the community has bolstered my resolve to find a lasting solution to the vandalism.”

Ben set up a GoFundMe page to collect enough money for a replacement, and at the time of this writing has met over $2,000 of his $3,000 goal. He has also been working with local sculptor Eric Wilson to repair the head “in the wabi-sabi style,” a traditional Japanese aesthetic centered on the acceptance of transience and imperfection. Dieterle may also cast a new rock-proof head from a second Buddha head he has indoors. “I will probably try to sell the wabi-sabi Buddha to help pay for the new Buddha, but if I can’t sell it, I will return it to the back garden and have three giant Buddha heads. Honestly all I wanted was one, but soon I may have three. I guess that’s not a bad place to be.”

If you’d like to donate to the new shrine:: https://www.gofundme.com/fix-vandalized-buddhist-shrine