Democracy is a process, not a product. 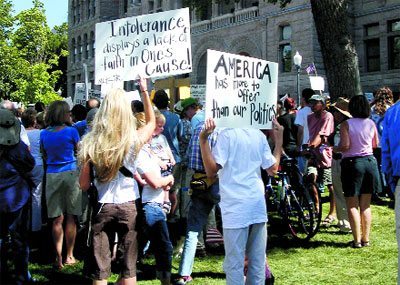 Of all the reasons President Bush and his advisors have given to justify the invasion of Iraq, the goal of making Iraq into a functioning democracy is the one currently on the table. The goal of giving an Islamic culture an extreme makeover is what keeps us in Iraq.

The initial reason given for invading Iraq reveals key characteristics of those who put us there. In the case of the missing weapons of mass destruction, we see the absence of fundamental critical thinking skills—a cavalier attitude about the importance of having enough information on which to base decisions, a fatal tendency to analyze wishfully the information they did have, and then manipulation of the conclusions to meet preset goals.

Our leaders also revealed their moral character, with a willingness to mislead and even lie to influence public opinion. They believed that truth is what they said it was, and that facts and dissenting opinions of allies did not matter. They believed the American people could be scared into anything and wouldn’t eventually discover the lies they were told.

Most Americans now see through those lies and also see the incompetence of those who thought they were so right and so smart that they didn’t need a plan.

But it has taken us longer to see through and give up on that justification of spreading democracy in the Middle East because it appeals to our better selves. Bush and buddies also needed a noble purpose that would speak to our ideals. Searching for WMDs is a mere hunt, but spreading democracy is a mighty quest.

If you are skeptical about their motives, you may just dismiss all that rhetoric about freedom and democracy as so much window dressing for an invasion that was also not about weapons of mass destruction and links to terrorists. It was always about the oil, you might argue, and still is. They have oil. We want it. Period. The invasion of Iraq, you might say, was as much about spreading democracy as EnergySolutions is about saving those endangered tree frogs that crawl across their television commercials.

To see just how much those who put us in this mess understand about democracy, let’s look at how our leaders have conducted themselves at home:

They started in 2000 with an election characterized by fraud and political manipulation. They treated the slimmest electoral validation possible as an unlimited mandate. They pushed through the Patriot Act which increases police powers at the expense of civil rights, created the domestic surveillance programs they insist require no oversight or permission, justified torture, censored science that doesn’t suit them, and pursued the wholesale looting of the democratic process by lobbyists.

Bush’s most ardent supporters don’t believe in the separation of powers or the separation of church and state. They never miss an opportunity to cut the public out of decision-making and to avoid oversight and accountability. Why would we think they know enough about democracy to teach it to anyone else?

Here are a few things they don’t get: A democratic culture is not made at the point of a gun in the middle of a civil war. Democracy is not downloadable—it isn’t an operating system you sell with a turnkey and then stand by to give technical support. Democracy is a system of government that rests on a culture with a history of incremental achievements.

Look at our own history. Abolitionists struggled for decades before slavery was ended at the conclusion of a bloody Civil War. The suffragettes struggled to extend the full rights of citizenship to women. There was a long and intense labor movement to protect children and workers and a Civil Rights movement to enfranchise people of color. Today, 230 years after the Declaration of Independence, we are still working to practice democracy, to reconcile our differences, and to understand how to live in a democratic culture.

The civic behaviors and tolerant attitudes we take for granted — such as agreeing to disagree, protecting dissent, communicating openly with one another, defining our communities inclusively, and not judging one another on the basis of religion, race, or ethnicity — did not come naturally or easily. They were acquired over generations, they are cumulative in nature, and we are still struggling to practice them.

Did George Bush really intend to stay in Iraq for a couple hundred years, or did he and his advisors confuse the development of a democratic culture with the establishment of an open marketplace, a legislative institution, elections, and a corporate media outlet or two? Did they confuse the trappings of democracy for the real thing? Democracy isn’t a stage set and props, it’s a play and actors.

Spreading democracy is indeed a noble goal, but we have the wrong delivery system.

You don’t midwife a baby with a hammer and saw; democracy is not made with bombs. A democratic system is made with libraries and schools. Public libraries and public schools, that is—open, inclusive, and accessible. It is made with independent bookstores and newspapers, unfettered radio and television, uncensored Internet access, public debate, civil rights, dissent, free artistic expression, and the guarantee that your opinion, let alone your last name, won’t get you killed at a roadblock. Foreign soldiers do not deliver such democratic tools, agreements, and norms, though a Peace Corps volunteer or an exchange student might.

We are not the first to have tried this approach. In 1941 the British Empire, in a parallel act of hubris, decided it could ‘presto-chango!’ create a nation out of rival ethnic and religious groups and Iraq was born.

Saddam Hussein held the country together with a brutal hand (much as the dictator Tito held Yugoslavia together before it broke up into ethnic warfare). We overthrew Saddam and thought we could download democracy, go home, and everyone would live happily ever after. As we have since learned, we were beyond naïve. It doesn’t work that way.

So it is not about democracy, not if you understand what a democratic culture really is.

Now, if it is about oil, and the control of their oil is the last compelling explanation for the invasion that is left, let’s talk about that. For example: What has been and will be the cost of the war versus a national campaign to become energy independent?

But let’s drop the rhetoric about freedom and democracy. That part of Bush’s mission is no more real than the weapons of mass destruction.

“Activist, urban librarian and environmental writer as well as the author of ‘Hope’s Horizon: Three Visions for Healing the American Land,’ Chip Ward (as the title of his fascinating book suggests) likes to focus on the sparks amid the global gloom,” writes Tom Engelhardt of The Nation Institute.