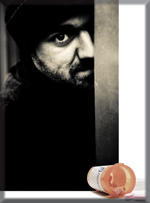 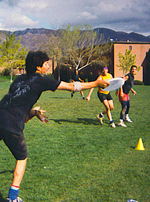 In 1975, when Gerald Ford (the President of gratuitous layouts) was stumbling around the White House and Nixon was slithering around San Clemente with a pardon instead of a sentence, the first pull of an Ultimate Frisbee was launched over Reservoir Park in Salt Lake City.

In 1975, when Gerald Ford (the President of gratuitous layouts) was stumbling around the White House and Nixon was slithering around San Clemente with a pardon instead of a sentence, the first pull of an Ultimate Frisbee was launched over Reservoir Park in Salt Lake City.

Now a resident of Cave Junction, Oregon, Art Vawter came to Utah in December 1974 and initiated the game of Ultimate here in spring of 1975, along with Skip Tripp, John deJong, and brothers Mark and Dave Christensen, among others.

Vawter started playing Ultimate in 1974 at Hampshire College with some of the New Jersey kids who had originated the game in 1968. It evolved to combine ideas of football, soccer and basketball with the skills of throwing and catching the Frisbee disc. The game is played with two teams of seven players on the field, each with the object of catching a pass in the opponent’s end zone. There are no referees; instead the players on the field make judgments based on what players call “spirit of the game,” a revered concept of sportsmanship and responsibility-fair and fun play.

According to Mark Christensen, they often played with a favorite adult beverage. Although Reservoir Park doesn’t have room for a full-size Ultimate field, he says they didn’t have great throws anyway, so the field was big enough.

In the early 1980s, Vawter’s team developed a rivalry with a team founded by Lou Pisacane, then a student at the University of Utah. With the help of New Yorker Jerry McManus, Pisacane gathered the best players from those two teams to form Salt Lake’s original traveling team, Deseret Discs. The team approached their first event, the Fourth of July Tournament in Boulder, Colorado, with overblown confidence. Says Vawter, “People were really psyched, and we really got walloped. There were a lot higher caliber players. We scored the first time we held the disc, and then this guy spiked the Frisbee-I don’t think we scored again.” How_ever, said Pisacane, “The fuse was definitely lit.”

That team became more savvy and competitive over the years, progressing through incarnations as Salt Lake Ultimate Team (you find the acronym), the Children of Zion, and the current Golden Spike. In the early years, they traveled all over the west from New Mexico to Alberta, lots of what Pisacane called “windshield time.”

Team member Michaela Condit recalls playing so many games in the Boulder tournament that she couldn’t even think about eating that night. She says, “We all felt that the Frisbee rules, including the ‘fouls called by team without the Frisbee’ fit very well with our ideas about how life should be lived-fully, with gusto, all-inclusiveness, getting along, minimal aggression and good sportsmanship.”

In May 1986, McManus and Pisacane started the first Daweena (“late snow”) Tournament, hosting teams from Montana, California and Colorado. While the tournament itself was memorable, the Saturday night party (always memorable) earned Pisacane the Bonehead Award from the Bozeman team. One Salt Lake player offered an empty garage at his apartment complex for the party. The players and revelers discovered the garage was owned by the LDS Church when 40 police officers showed up with paddy wagons and police dogs to make the big bust.

“The Ultimate player is a seriously in-shape athlete who could be at Burning Man-a hybrid athlete,” says Pisacane. “There are a lot of science and math geeks. There are guys who would wear skirts.” You’ll find neurosurgeons, photographers, lawyers, mechanics, students, FBI agents, bakers, computer science professors, eco-landscapers and many others who are willing to cleat up and chase a disc. And we’re talking both men and women, here.

One year, at their own tournament, the Logan team was getting beaten badly. Pisacane recounts, “They all came out on the field and played for three points buck-ass naked just to psyche everybody up. All the other games stopped and the players ran over and watched the Logan team play naked, and then the cops showed up-they had their clothes on by then.”

While Vawter and Pisacane have since moved away, Utah Ultimate is flourishing with pickup games, tournaments and league play. The Daweena tournament marked its 23rd anniversary in May and including men’s and women’s teams from across the West. Thirty-four years later, Mark Christensen still plays pickup on Saturdays at Sugar House Park, donning a knee brace and a grizzled look that says, “throw it long and high.” He is often joined by his tall and lanky 24-year-old son Eric, who, along with Chris Watkins and Tom Moyers, heads the Golden Spike team along with leaders Simon Pugh, Chris Watkins, and Ed Tyner and others. The Spike team features another second generation player, Mia Greenwald, daughter of Catherine Greenwald, a player and coach from the Boston area. At 17, Mia, who Tyner says “would rather break her head than let her team down” joins fierce veterans like Scooter Connolly, Amanda Wing and Mo Stamp. The younger Christensen also helps lead a nationally competitive University of Utah team, and as BYU and Utah State also have teams, high schools like Skyline, Brighton, and Alta are breeding another generation of dedicated/obsessed Utah ultimate players.

Besides the Saturday game and the lunchtime game at Sugar House Park, there are many opportunities to play the sport in Utah including pickup games in Big Cottonwood Park, Murray, Lehi, Logan, Ogden, and Orem as well as county league, which now has four seasons. You can find out more at utah-ultimate.org.

Joel Long is a Salt Lake poet and educator. He has been playing ultimate since his 16-year-old daughter was in diapers.