Who determines the value of public lands?

Utah legislator Ken Ivory (R West Jordan) wants the State to hire a consultant in order to determine how much tax revenue could be collected if Utah’s public lands were sold to private ownership.

In his day job, Ivory is a lobbyist for the American Lands Council (ALC), a right-wing oil industry-supported group with a mission of transferring federal public lands to state control (he was president of ALC until 2016 despite obvious conflicts of interest). Ivory claims that Utah’s public lands would generate significantly more tax revenue if they were privately owned.

Conversion of wild lands is likely to cost nearby communities more than the market value of extracted resources. In 2002, the journal Science published an article on “The Economic Value of Conserving Wild Nature.” The researchers found that degradation of natural habitats was eroding long-term human welfare for short term private gain: “In every case examined, the loss of nonmarketed services outweighs the marketed marginal benefits of conversion, often by a considerable amount.”

Wild lands development is a classic market failure (that is, a situation where free markets become inefficient), particularly when the presumed benefits of privatization are exaggerated by unrealistic ideology, or development is artificially driven by tax incentives.

The State of Utah already receives tax revenue from public lands from a federal program called “payment in lieu of taxes” (PILT) that was established in 1976. PILT uses a complicated formula based on acreage, population, and the Consumer Price Index to calculate payments. It ignores the increase in property values for public land adjacency, and assigns no value at all to tax revenues from tourism, recreation, or hunting and      fishing. In FY 2017, Utah counties received $39.5 million in PILT money, but public lands actually generated far more tax revenue than that.

The Pew Charitable Trust tallies the value of Utah’s BLM land just for hunting, fishing and wildlife watching at 840 jobs and $5 million in state and local tax revenue. The 2018 Economic Report to the Governor reports that in 2016, travel and tourism related tax revenue was $1.2 billion.

2019: The year for a revenue-neutral carbon tax?

In the Utah State Legislature, Rep. Joel Briscoe (D-Salt Lake City) was overwhelmingly re-elected. He is drumming up public and political support for a bill to tax greenhouse gas pollution.

The non-partisan bill, based on an idea from the Citizens’ Climate Lobby, is revenue-neutral so that carbon taxes replace other taxes.  Briscoe introduced versions of the bill in both 2017 and 2018, and will try again in the 2019 General Session of the Utah Legislature that runs from January 28-March 14, 2019.

In January, newly elected Democrats will be the House majority in Washington and Utah Congressman Rob Bishop (R-UT-1) will no longer chair the House Resources Committee that oversees legislation dealing with America’s public lands. Bishop, who formerly chaired the Congressional Western Caucus, pushed an agenda of privatization, transfer of public lands, energy development and “multiple use” (in the sense of not supporting conservation areas). The new chair is likely to be Raul Grijalva (D-AZ-3), a long-time advocate of public lands conservation.

With the new Congress not yet in session, Interior Secretary Ryan Zinke is nonetheless under investigation for ethics violations and there are likely to be more such investigations for government accountability. Watch out for attempts to force through anti-environmental legislation in the lame-duck Congress before January.

And in San Juan County….

Thanks to a lawsuit against race-based gerrymandering, two Navajo tribal members, Kenneth Maryboy and Willie Grayeyes, were elected to the San Juan County Commission. Both of them support the original boundaries of Bears Ears National Monument.

Not pleased with the voting result, San Juan County’s white Republican leaders have filed an appeal to can the court’s earlier ruling. ”As expected, if you pack a super majority of Navajo, Democratic voters in districts, they’re going to win,” San Juan County attorney Jesse Trentadue stated, apparently without irony..

SLC Mayor gets behind national monuments

Remarkably, the Bears Ears brief calls into question whether an extraction-based economic future is desirable for Utah at all, since “opening monument lands to mining will lead to environmentally destructive development and a harmful boom-and-bust cycle”—a phenomenon known as the “resource curse.”

Cache Valley has become the first air-quality nonattainment area in the state of Utah to meet federal standards for PM2.5 (small air pollution particulates that cause respiratory and cardiovascular disease).

The next step is for Logan to submit a maintenance plan in order to keep the air clean.

U of U earns “Bicycle Friendly” gold

Congratulations to the University of Utah which has earned Gold designation as a Bicycle Friendly University from the League of American Bicyclists! In 2017 the U created a new position for an Active Transportation Manager and hired planner Ginger Canon to help improve human-powered transportation on campus.

U Pedals to Gold: bit.ly/2TrdFkD

The State of Utah plans to petition the U.S. Department of Agriculture for a state-specific rollback of the 2001 “Roadless Rule” that limits forest road building associated with industrial logging.

The Roadless Rule was implemented to promote stewardship of undeveloped forests. It protects species habitat, watersheds and recreation areas on about half of Utah’s National Forest lands amounting to about 4 million acres.

While the State of Utah claims that road building is necessary for wildfire prevention, most wildfires are human-caused. Building roads into forests would bring in more people and, with them, more fire danger.

The Wilderness Society says that in the last five years, 90% of forest acreage burned was outside of roadless areas. What’s more, the Roadless Rule already has provisions to deal with wildfire emergencies.

The real reason the State of Utah wants the proposed rule change seems intended to avoid environmental regulations on logging and to eliminate opportunities for public input. Utah has already asked county commissioners to submit recommendations for how they would like to manage National Forest lands.

A “confidential and privileged” memo dated November 30, 2016 from Utah Public Lands Policy Coordinating Office, a state agency whose purpose is to “preserve and defend rights to access, use, and benefit from public lands within the State,” complains about “de facto Wilderness”  and advocates an agenda to “revoke the Forest Service’s roadless rule and reinstate timber production on federal land that has been managed as special areas or roadless areas.”

Baby aspen trees have sprouted in areas burned by the 71,673-acre human-caused Brian Head Fire of 2017. Aspens are a disturbance-dependent species that grows from existing roots after fire reduces shade from conifers. The quick return of aspens provides food and shelter for animals in burned areas.

Aspen groves don’t burn easily and make forests more fire resistant, but Western aspen forests have been in decline since a period of severe drought from 2000 to 2004.

New species of bees discovered in the Beehive State

Bees are important pollinators, but in many parts of the world insect populations are in decline due to pesticides, monoculture crops and conversion of undeveloped land.

The impact of insect loss cascades through the food chain. A press release on the bee study quotes entomologist Joseph Wilson: “[GSNEENM] is an amazing natural laboratory of pollinators, of which we don’t know a lot. The large reduction of this protected area could have implications for future biodiversity.”

Examples of some of the bee genera found in Grand Staircase-Escalante National Monument. 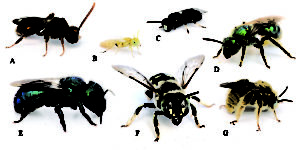