In writing this brief history of Salt Lake yoga, I’m relying on memory, CATALYST archives and a little help from some yoga friends. This is by no means an exhaustive history. Please leave comments online if I’ve left something out that’s important to you. We would like to have a complete and accurate history of yoga in Sat Lake City.

In January of 1982 I decided—out of curiosity—to try a yoga class. In a pink-carpeted room in the back of the Sahara Hotel in Las Vegas, I experienced my first post-asana high. My first hour and a half of gentle poses, including a generous, guided relaxation left me feeling clearer and quieter than I’d ever felt. I knew I’d found a home in Hatha Yoga.

The teachers, Olivia Mason and David Riley were a married couple, a physical therapist and a doctor respectively. They taught Iyengar-style yoga at the First Unitarian Church. Iyengar-style yoga is a meticulous, alignment-based practice, and far more active than the flow-and-glow classes I was used to. I loved learning from Olivia and David, with their deep understanding of anatomy and alignment.

I assisted in their classes for almost four years, and when they moved to Santa Fe, they left me their classes, which I shared with Lance Daniels (now at Sivananda Ashram in Pennsylvania) and Jay Jones, founder of Salt Lake’s Bikram College of India in Sugar House. I taught at the Unitarian Church for the next 25 years before moving to International Wado-Ryu Karate-Do Institute (IWKI) in 2011.

Another thing I loved about Olivia and David is that they often brought senior Iyengar teachers to town for workshops. At these workshops, I not only learned a ton in relatively intimate settings—back then 30 students was considered to be a huge class—I also got to meet the Salt Lake yoga community. Most of Salt Lake’s half dozen or so teachers would gather at these workshops. Here, I met Gennie Coleman, Lin Ostler, Roz Newmark, Claudia Pierson, Lance Daniels, Susan Ann Stauffer and Jay Jones.

Just about everyone had studied with Gennie, an Iyengar-based teacher who is still teaching after 45 years. Gennie initiated the U of U’s first yoga program and currently teaches at the Columbus Center. Lin Ostler is close behind in longevity, with 40 years of teaching under her belt. Lin’s eclectic background—Sivananda yoga training and teachers as diverse as Donna Farhi and Shiva Rea, along with her training as a doula—gave her a reputation as a unique, evolving teacher with a special gift for prenatal and postnatal practice. As far back as 1978, the animated dancer/teacher/photographer Roz Newmark was holding community ed classes at Cottonwood High. She also still teaches, now at IWKI. On the Kundalini front, the gracious Deva Kaur Khalsa has taught continuously at least since the 1980s. 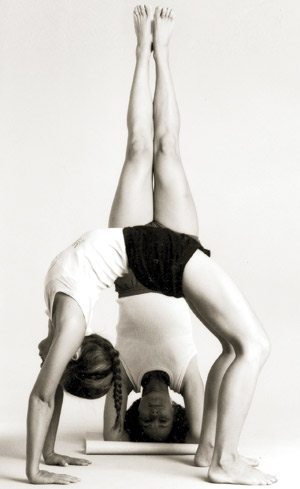 Back in the 1980s, yoga classes took place in community spaces such as church social halls, the YWCA and school classrooms, where you’d have to come early to shove the desks and chairs out of the way to make room. If you wanted to use props, you had to haul them around in your car. (Speaking of props, Hugger Mugger Yoga Products, an international manufacturer of yoga products, was founded in Salt Lake in 1986 by Sara Chambers, a student of Olivia and David’s. I actually own the first pair of shorts that started the company.) While the teaching spaces were far less suited to yoga than today’s studios, the classes were intimate and humble, and the small community of teachers was friendly, cohesive and mutually supportive.

In the early 1990s, Salt Lake got its first yoga studio. Danielle Lin and her then partner, a Kundalini teacher, opened the Yoga Center in Holladay. Set up as a Kundalini studio, complete with shag carpeting and a stage, the studio has evolved through three owners and been completely remodeled and reborn as an inclusive yoga and healing center.

Since then, studios including Flow Yoga (now Shiva Center), Avenues Yoga on K St., the late Kula Yoga (Fourth South)and most recently, Prana Yoga (in Trolley Square) studios and Zen Living Yoga in Sugarhouse have sprung up around the city. Many of these studios focus on particular styles of yoga—Bikram, Power, Prana Flow, Vinyasa Flow, Anusara, etc.—that have been formulated, and in many cases copyrighted, by modern teachers since the yoga boom of the 21st century began.

Back in the 1980s and 1990s, I knew pretty much every teacher in town. These days, with hundreds of teachers being certified at studios each year, I would be hard-pressed to identify 5% of the teachers here.

Yoga is now firmly entrenched in the mainstream. Every gym, college and community ed program offers it, and its mainstreaming has certainly faded the weird, hocus-pocus reputation that made it a challenge to promote in the old days. Western yoga has become known as a healthy exercise program, with a distinctly ancient, Eastern flavor.

While multitudes more people are discovering the practice due to its mainstreaming, discarding the spiritual aspects of yoga as many yoga styles have, comes with a downside. I wonder whether we as a culture are selling ourselves short. The physical practice is only a small part of the system. In my opinion, the juiciest parts of yoga come as you begin to explore the rest of the vast system. However, it takes time to find your way into the more profound aspects of yoga. As Salt Lake yoga continues, I look forward to seeing how our community evolves.

This article was originally published on July 31, 2012.