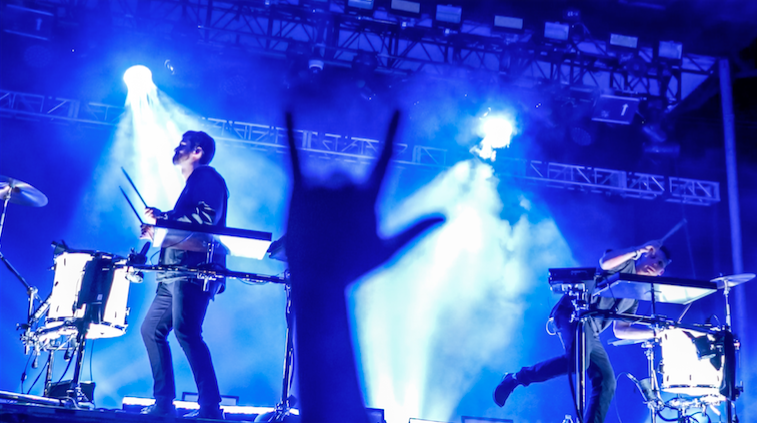 While Bonanza is a commercial multi-genre festival, with little to no conscious or transformational aspects yet (ie Burning Man), the festival shows potential for this. It’s attracting big names in electronic music, including ODESZA, Duke Dumont, Jai Wolf, Big Wild, Bob Moses, Cut Copy, and TOKiMONSTA. The drive takes just under an hour from Salt Lake, so the younger contingent of the CATALYST crew packed its bags and headed to beautiful Heber.

Nestled in the River’s Edge Resort at Deer Park, at the base of the Jordanelle Dam, the festival grounds are hidden deep in a grassy, creek-braided canyon. The jagged edges of the dam create the skyline and connect the mountains on each end. The piece of property was designed to host music festivals (it will also be the site of the Reggae Rise Up festival this August 19-20) and a smart mix of hearty vegetation and an extra layer of hay makes a natural concert ground that’s resilient to the weight and stress of tents and the stomping of many feet.

I had been looking forward to a weekend escape: the tedium of scheduled life had been yelling some questions at me. What am I supposed to do with my life? How do I do the most good and still have a great time? Those questions quickly quieted as soon as we drove up the canyon and more pressing matters arose: how does load-in work?

The daunting task of schlepping all our stuff on multiple trips in and out of the walk-in campgrounds lay before us. Festival volunteers and security, we came to find, didn’t really know what was going on (though everyone we worked with was polite and tried to be helpful). Designated parking lots a couple miles away required attendees to use shuttles to get back to the event. On the environmental side, carless camping preserved the grounds better, made more space for people on-site and encouraged carpooling. We liked the idea, even though it made setting up camp complicated.

Once we had parked the car, we boarded the big yellow school bus shuttle from the parking lot. It felt like we were headed to summer camp. Delighted campers introduced themselves on the bus as music blasted through the speakers.

The crowd was young, and spritely. Everyone was so friendly and excited to meet each other. As the sun set Friday night in the general camping area the lines quickly blurred between “mine” and “yours.” Neighbors shared beers, blankets, and excited conversation. The on-site Police officers, outfitted in an intimidating bulletproof-vest and shades to match didn’t really seem necessary. It was a peaceful crowd.

There were a lot of beautiful people. Men were shirtless, girls were covering their skin in glitter. We saw a lot of trucker hats, neon, tiny jean shorts, miniature glittery backpacks, chakra-balancing color sunglasses, and only ONE person sucking on a binkey. Thank god.

The food lineup offered a broad spread of local favorites. Jennifer Buckalew, a local entrepreneur and owner of SLC’s food truck Reverstaurant, on Broadway, and owner of beloved festival food truck, Poutine Your Mouth, had organized the food area. Even Stevens brought colorful vibes with their huge, artist-converted food-service shipping container. There were vegan options, Cuban-inspired Havana Eats, an Italian food booth, and many more. All food was purchased through RFID wristbands.

The RFID wristbands marked Bonanza as a cashless festival. Attendees loaded the chips on their wristbands in $10 increments at top-up stations in the festival grounds in order to purchase the food, beverage, and merchandise. Any unspent funds could be refunded for a fee of $5. While the RFID wristbands had their benefits, there were some downsides.

The RFID wristbands deterred some festival-goers from spending any money in the festival at all. People with campsites relied mainly on the food and booze they had packed in for the weekend.

Local pro-skier Hayden Price is a seasoned festival mover and shaker, who worked with one of the retail vendors commented on the RFID wristbands, “I could see how it would work for food and beverage, however it didn’t work for retail. It would often kill sales when people couldn’t use cash for more expensive items.”

It was clear that a couple of second-year logistical kinks still need some smoothing out. Some of the disorganization played in our favor, and some less favorable, ranging from inconvenient to downright dangerous. The tent camping area for hundreds of campers had less than ten porta-potties, which were full by Saturday morning. Due to a two-hour fire marshal inspection Saturday morning, the entrance from camping to the festival was blocked, making the dozens of clean, empty porta-potties inside the festival grounds inaccessible to campers.

The Pond Yacht After Parties provided a good space for those who camped a place to keep the party going after the festival itself was closed down for the night. Friday night, however, the tiny dock-themed dance floor set about two feet off the ground broke. While the small dance floor was a great idea–people fell off it all weekend due to its height and construction.

On the other hand, the festival grounds were never at any point over-crowded—sweet relief from the overwhelming masses in Coachella and Burning Man. Even though the crowd was upwards of 7,000 for the weekend, the setting remained intimate.

Talking to a couple from Reno, NV, they were shocked at how manageable the crowd size was. They were also more than happy to foot the $70 advanced day-pass tickets to see ODESZA who, for example, played at Colorado’s famed Red Rocks venue in May, for ticket prices in excess of $100, and sold out months before. Utah’s classic, “You have all this so close, for so cheap, and so few know about it?” magic was clearly at play again. We also talked to people from AZ and CO, who found the $150-$180 GA weekend passes a deal too good to pass up.

The dynamic lineup brought people from all genres: ravers, rockers, hip-hoppers, and maybe even some metal heads. Friday night, the DJ duo The Knocks, known for their poppy, funky hit, Classic (feat. Powers), put on a show that certainly made some new fans. The NYC-based duo, James “JPatt” Patterson and Ben “DJ B-Roc” Ruttner engaged with the crowd immediately. They started the show letting everyone know that they were in a safe space in this crowd “no matter your skin color, religion, sexual orientation or political beliefs” and that during their show, every one is in support of one another. It created a vibe of unconditional tolerance and acceptance. “The crowd felt like it was moving as one big organism, with The Knocks as our conductors,” one audience member told me.

Saturday’s stand out performance was TOKiMONSTA, or Jennifer Lee, a Korean American DJ from Los Angeles. She announced the beginning of her set with an ambient harp sample. Within two minutes I was out of camp and in front of the stage (because that’s how wonderfully close everything is there) staring up at one of the few female-fronted acts on the lineup. She was confident manning the booth, mixing ambient beats and rap, wearing a flowy pink floral shirt and bright red lipstick. She was a joyful presence. She felt the music drops with the ecstatic audience. She closed her eyes and swished her hair carelessly in the heat of the summer mountain sun. Her smile warmed us along with her bouncy, droppy, hip-hoppy, and at times beautiful set.

When it came to the headliners, there are three emotions that sum up our experience: Nick Murphy (aka Chet Faker) gave us sad, Lauryn Hill gave us mad, and ODESZA gave us love. It was an emotional rollercoaster, but it all ended up being okay.

Chet Faker, who performed at Twilight Concert Series last summer, appeared in his new (or old, since it’s his real name) Nick Murphy identity. He played his famed hip-hop acoustic cover “No Diggity” with some disinterest. “Sleepy,” as described by others.

Ms. Lauryn Hill’s set was less positively received. Her DJ occupied the audience for 45 minutes past her set start time. Her band entertained the crowd for another 10 minutes or so. Finally, Ms. Hill walked on stage. She might have addressed the crowd once or twice. She gave Utah a few shout outs. I daresay nobody was convinced that she felt any enthusiasm. My friend who has been a huge fan of her since childhood looked over at me a few minutes after she started singing. “What a buzz-kill,” he said.

Then there was ODESZA. The pair, Harrison Mills and Clayton Knight, had everyone in a trance as soon as they played their first song. “We are so happy to be here,” They told us over and over. Finally, a headliner who actually wanted to play for us.

Maybe it was the combination of psychedelic, excited vibrations coming from the crowd and the ingenious picnic table friends had dragged to the Bonanza Stage to stand on, but within minutes of ODESZA’s set and their first wavy post-drop melt, everything came into focus.

These questions that had been gnawing at me, are really tough to answer when you don’t take a minute to stop asking them. Spending time outdoors in a beautiful area, with a good group of friends, a good camp set up, and some great music acts certainly helps shift perspective, and most importantly gives space for some answers.

Staring into the lazers and smoke coming from Bonanza’s main soundstage, as ODESZA served us up old favorites like “IPlayYouListen” and songs like “Line of Sight” and “Late Night” from their long awaited new album, A Moment Apart, a really simple answer to the complex questions about “what we’re here for,” easily fell into my lap.

“Love.” It was like someone took a crowded chalkboard with endless hypotheses to one problem, crossed them all out, and scribbled one singular digit to answer the equation.

“The love was definitely there,” says Hayden Price of the overall vibe, who also hopes to see a more conscious aspect to future Bonanzas, “Things that could help that would be to add an element of healing arts.”

While there were no healing arts elements to the festival, there is definitely room for it in future years.

From Coachella to Burning Man, and many large and small festivals in-between, one would be lead to believe the attending CATALYST staff of Bonanza Campout, had a good grasp on the spectrum of festivals: conscious to commercial. We emerged with some new insight.

A shift in consciousness can come in many forms. And perhaps attracting the larger, more diverse crowds with big name headliners allows a new outlook where it can do the most good: where it is not being purposely sought out.

We’ll be honest, while some logistics need to be improved upon for next year, we still had a blast, and would highly recommend Bonanza. We had enough of a profound experience the CATALYST staff spent a good amount of time unraveling the details of why our experience at Bonanza meant so much to us. We won’t be the first or last to say it–Utah needed this.