The Education of Farmer Pete 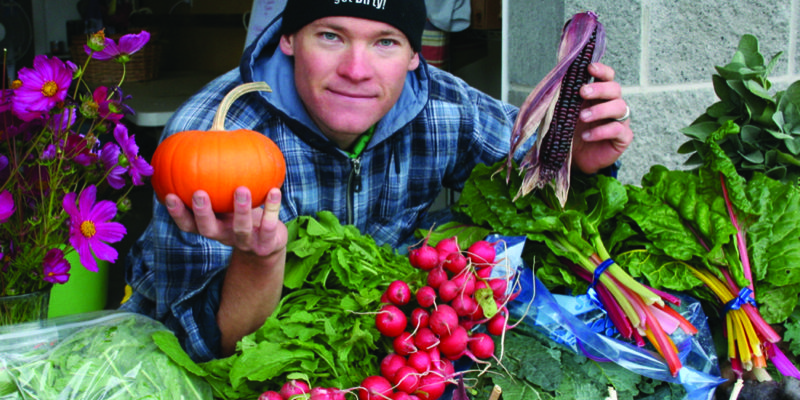 Sandhill Farms is well-known among Salt Lake-area food lovers and growers. It is the source of over 30 varieties of hardy heirloom culinary and seed garlic. The farm lies 50 miles north of Salt Lake City, north of the Pineview Reservoir, nestled against the Wasatch Mountains in Eden, Utah (population 600) between the North and Middle Forks of the Ogden River.

In 2005 Peter Rasmussen began working the land at this site—a two-acre parcel in his parents’ back yard. Situated in an alluvial flood plain, where alfalfa and Timothy grass had been growing, the plot offered up soil any farmer would envy. At age 22, Rasmussen acquired a new moniker: Farmer Pete.

Baby with a wheelbarrow

Born in Salt Lake City, Rasmussen had grown up on the Olympic Peninsula of Washington state where his mom grew snap peas and sweet peas, cosmos, carrots, spinach, onions and more. “And I got my hands dirty, watched insects crawl and fly and ate from the vine,” he recalls. According to family legend, one day the preschooler harvested his mother’s crops and pushed a small wheelbarrow of produce to the neighbors—“my first farm-direct sales attempt. I’m pretty sure I sold out,” he says.

One year in high school, he worked on a small-scale organic farm in his hometown. “Working outside in the spring sunshine felt pretty damn good. Using my muscles to shovel compost into the fields, watching other workers dash throughout the farm from one task to the next, it all fascinated me. I’ll never forget that feeling, of belonging to a team that was creating something abundant and beautiful with the earth, and that I had a responsibility to honor those relations. That was an important experience for me as a high school student.”

Those memories settled deep into Rasmussen’s psyche. (In fact he says he thinks he may have been a farmer in a past life,” but that’s another story.”) College took him to the University of California-Santa Cruz, where he discovered the Center for Agroecology and Sus­tain­able Food Systems (CASFS) research farm.

“Whether I was learning about bio-intensive, hand-cultivation market gardening, or in the fields watching a flail mower and spader transform a green-manure field, my time at CASFS has hugely influenced the way I aspire to farm,” he says.

In those years he encountered hardneck garlic (allium sativum ophioscorodon). “I stumbled upon a plant that would become my obsession. Garlic was definitely love at first sight,” Rasmussen says. Hence, his new little farm became known for producing garlic.

Rasmussen and his wife Kati Greaney manage the farm and develop goals together. The Santa Cruz farming program’s focus on young farmer education and applied research in organic farming management systems is an influential model for them as they envision the future growth of their Eden farm.

As a professional photographer, Kati documents the farm through video and photography. Toddler son Jorro is learning the ropes of tractor driving and garlic harvesting, according to his father. “Family is involved in every aspect of the farm,” Rasmussen says. He credits his parents, Mark and Marsha, with keeping the farm vision alive. His sister Elle is in on the action, too, along with employees Nora Sacks and Grace Rosenthal, and “many more extended farm family members and influencers.” Volunteers from Slow Food Utah, Wasatch Community Gardens and Real Food Rising show up a few times a year for “amazingly fun and productive” farm mobs, he says.

In addition to the original two acres, they now also lease 10 acres of new farmland at an historic dairy farm across the street from the Eden Park. Rasmussen and his crew raise vegetables, herbs and flowers without chemicals or any synthetic substances. “We use only non-GMO and organic seeds as much as we are able. We use certified organic amendments and compost, incorporate cover crops and green manures many times in a season, and rotate our crops annually. We are currently in the process to become USDA certified organic.”

A vocation (aka obsession)

Asked what he does when he’s not farming, Rasmussen says he dreams about farming. “Just kidding. But it’s true that quite often, when I’m not physically farming, I’m still mentally farming. A unique characteristic to farming and gardening in northern Utah, or any similar cold weather winter climate, is that operations usually slow down a bit in the winter, and this allows for planning, business development strategizing, accounting, budgeting, crop yield calculations and planting calendars.

Rasmussen waxes poetic about his likeness to the sandhill cranes that come and go: “They arrive in the spring as the snow melts and garlic grows—grounded for a summer season—fall harvests and garlic planting… and by the first big snow fall, they migrate south or west.” During the past decade of winter off-seasons, Rasmussen worked as a garden and nutrition teacher at an elementary school in Oakland, California for several years. He worked for the non-profit food justice and farmworker advocacy organization, Community Agroecology Network, where he coordinated student field-courses in rural farming communities in Latin America. He and Greaney spent several months in Cuba learning about and documenting Cuban farmers and their stories as innovators in sustainable agriculture. They produced the documentary Guajiros, about agriculture education in Cuba.

“Each winter season is different, and how much we travel will continue to evolve as our family expands and opportunities for growing the farm continue to take shape.”

Farmer-to-farmer, around the world

Farming is very humbling—“I’m not that good, and I have so much to learn,” says Rasmussen. “I’ve learned what I know and implement now through observation of other farms, and trial and error. And I definitely have farmer role models. “

Travel played an important role in Rasmussen’s education as a beginning farmer, as he visited rural agricultural communities in Mexico, Guatemala, Cuba and Costa Rica. “I saw systems of agro-ecosystem production that are rooted deeply in the local community and economy, that use innovative methods for improving soil ecology and boosting yields and that produce high-quality produce on small parcels of land,” he says. He learned about innovative farmers who creatively produced alternative farm revenues through agri-tourism, on-farm food and fresh-juice side- businesses and value-added product lines to sell at local markets or for distribution.

“Traveling to other countries and learning about new foods and different farming practices always reminds me of the importance of farmer-to-farmer communication and education,” he says. “So much can be learned by walking through a friend’s garden, taking a tour of agri-tourism farm, or volunteering on harvest day at a commercial market vegetable farm. Learning to farm is about being a systems observer, always experimenting, analyzing, re-thinking, improving, adapting and, hopefully innovating.”

He continues to learn through the connections to other farmers via social media —Instagram, farmhack.org and other online resources. “The community of farm-based learning and open-source information sharing is impressive, and needed, to counter the pressures imposed from the system of industrial ag,” he says.

Appropriate technology, often seen in lesser “developed” countries, is an important part of smallscale farming. Tools for growing a diverse array of produce are markedly different from those used in agribusiness to grow monocrops of corn, soybeans and wheat. Last year Sandhill Farms received a Slow Food micro-grant to purchase a Quick-Cut greens harvester, a hand-held, power drill-driven salad greens harvest tool. After one season of use, Rasmussen is sold. “It is this kind of scale-appropriate technology that will improve farm efficiency and overall viability.”

Whether he’s in his fields, on the computer or visiting a foreign farm, Rasmussen seems to be always learning. His ideas and practices continue to change through the years—”sometimes multiple times a day,” he says .

As the number of American farmers decreases and their average age rises (now at around 58 years old), Rasmussen is an anomoly in many ways.

But his natural flair for farming, cultivated through years of formal training and life experience, is a shining example for future young people who think they, too, might like to make a living off the land. u

Greta deJong is editor and publisher of CATALYST.

You can find Sandhill Farms at the Downtown Saturday market beginning in June and at the Sunday Park Silly Market in Park City. They also sell produce to local catering and event companies, to Liberty Heights Fresh in Salt Lake City and some farm-to-table restaurants. The heirloom culinary and seed garlic are available online, at farmer’s markets or directly from the farm, by appointment.

Drop locations: in Sugar House, Park City, Ogden and at the farm in Eden